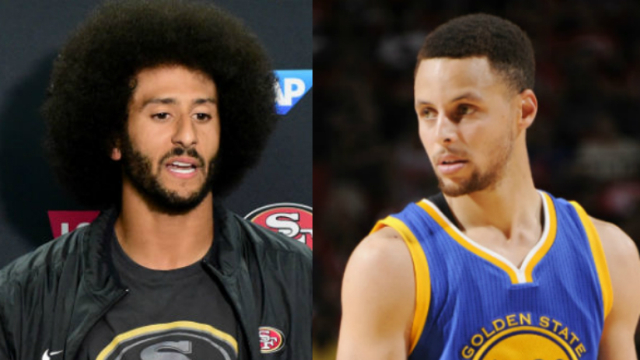 There is a famous Maya Angelou quote, "When Someone Shows You Who They Are, Believe Them ."

Donald Trump has issues with Colin Kaepernick, Jemele Hill, and Stephen Curry (Wonder what they all have in common there?), all athletes are people in sports who don't support him or that have PEACEFULLY protested, but he seems to have no issues with white nationalist.

Trump's words last night at a campaign rally for Luther Strange show that he is very upset about attacking NFL players who kneel during the national anthem. He is more upset about that than white nationalist who marched while making anti-Semitic slurs at the University of Virginia, or the white supremacist who injured many and killed one person in Charlottesville. Trump showed more passion in calling black NFL players "son of a bitch" than he ever did when he was forced to denounce the alt-right. Watch that segment of his speech below:

Wow he seemed pretty fired up there and got a great reaction from the crowd filled with his supporters. But that wasn't enough; Trump had to take a shot at Stephen Curry and the Golden State Warriors after they pretty much said they didn't want to visit the White House to be honored for the 2017 NBA Championship.

In a response that took far shorter than the 48 hours it took to respond to the horrible events in Charlottesville, Trump tweeted:

Going to the White House is considered a great honor for a championship team. Stephen Curry is hesitating,therefore invitation is withdrawn!

Of course what Trump did there was quit before he could be fired or dumped a girlfriend/boyfriend before they dump you. Trump also doesn't understand that you can't rescind an invitation that was never given or that was not going to be accepted anyway.

As every day passes he is showing that he doesn't care about anyone but his base, the rest of us be damned.

If not a racist then Trump is a man who has no problem being associated with racist or defending them.

The man has shown us who he is. Believe him.