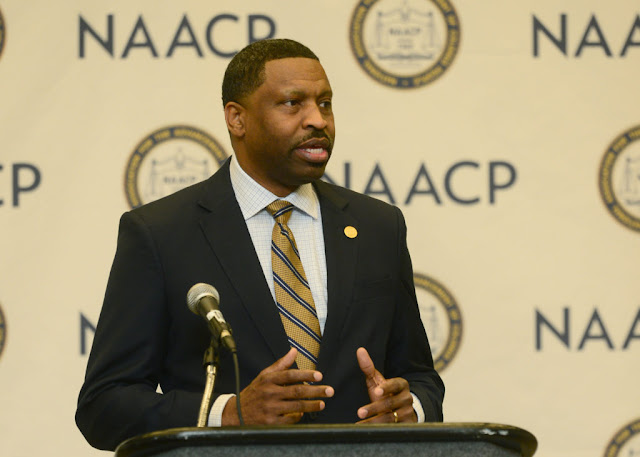 BALTIMORE (October 21, 2017) —The National Association for the Advancement of Colored People (NAACP), America’s largest and original legacy civil rights organization, has unanimously elected Derrick Johnson president & CEO, it was announced today. Johnson, 49, has served as interim president and CEO since July of this year.
A Detroit native now residing in Jackson, Mississippi, Mr. Johnson, who was also elected vice-chairman of the Board of Directors in February of this year, is a longtime member, leader and a respected veteran activist who will be tasked with guiding the NAACP through a period of tremendous challenge and opportunity at a key point in its 108-year history. The NAACP has undergone transitions in leadership this year as it re-envisions itself to take on a tumultuous and contentious social and political climate. He will have a three-year term.
“In his time serving as our interim president and CEO, Derrick has proven himself as the strong, decisive leader we need to guide us through both our internal transition, as well as a crucial moment in our nation’s history. With new threats to communities of color emerging daily and attacks on our democracy, the NAACP must be more steadfast than ever before, and Derrick has the vision, mobility and courage to help us meet that demand,” said Leon Russell, Board Chairman of the NAACP. “As both a longtime member of the NAACP, and a veteran activist in his own right – having worked on the ground to advocate for the victims of Hurricane Katrina, along with championing countless other issues – Derrick also intimately understands the strengths of the Association, our challenges and the many obstacles facing black Americans of all generations today. I look forward to continuing to work with him in this new role,” he added.
Mr. Johnson has an extensive history and career legacy of dedicated civil rights activism. He formerly served as state president of the Mississippi State Conference of the NAACP, where he successfully spearheaded campaigns for voting rights, worker’s rights and equitable education, and he additionally is the founder and executive director of One Voice, Inc., a Jackson-based non-profit organization conceived in the wake of Hurricanes Katrina and Rita to enhance the quality of life for African Americans through civic engagement training and initiatives.
Additionally, as a past regional organizer with Southern Echo, Inc., another local non-profit organization, Mr. Johnson provided legal, technical and training support to communities spanning the south. He was appointed to the Mississippi Access to Justice Commission by the chief justice of the Mississippi Supreme Court, owing to his years of committed service to the people of the state.
Having earned a solid educational foundation, Mr. Johnson attended historically black Tougaloo College of Mississippi, before going on to earn his Juris Doctorate degree from the South Texas College of Law in Houston. He was later awarded fellowships from the Congressional Black Caucus Foundation, the George Washington University School of Political Management and the Massachusetts Institute of Technology (MIT). He proudly serves on the board of directors of both the Congressional Black Caucus Institute and the Mary Reynolds Babcock Foundation.
ABOUT THE NAACP:Founded in 1909, the NAACP is the nation’s oldest and largest nonpartisan civil rights organization. Its members throughout the United States and the world are the premier advocates for civil rights in their communities. You can read more about the NAACP’s work and our six “Game Changer” issue areas by visiting NAACP.org.– ### –