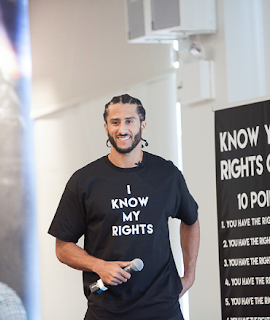 Steadfast in his fight for social justice and committed to his beliefs no matter the cost, Colin Kaepernick is the recipient of the 2017 Sports Illustrated Muhammad Ali Legacy Award.

Colin Kaepernick made his truth known when he first decided not to stand for the national anthem. He had a lot of football left to play and a lot more money to make when he made his decision. It was late August, 2016. People who were anonymous in life had become famous in death. Philando Castile. Eric Garner​. Alton Sterling. Freddie Gray. They were tragic symbols of a society that had taken a terribly wrong turn. As the anthem played ahead of the 49ers' preseason game against the Texans, Kaepernick, San Francisco's 28-year-old quarterback at the time, quietly took a seat on the bench.

It took two weeks for anyone from the media to ask him about it. Kaepernick explained that he was making a statement about inequality and social justice, about the ways this country “oppresses black people and people of color.”

“To me, this is bigger than football and it would be selfish on my part to look the other way,” he added. “There are bodies in the street,” he said then, “and people getting paid leave and getting away with murder.”

In the last 16 months, Kaepernick’s truth has been twisted, distorted and used for political gain. It has cost him at least a year of his NFL career and the income that should have come with it. But still, it is his truth. He has not wavered from it. He does not regret speaking it. He has caused millions of people to examine it. And, quietly, he has donated nearly a million dollars to support it.

For all those reasons—for his steadfastness in the fight for social justice, for his adherence to his beliefs no matter the cost—Colin Kaepernick is the recipient of the 2017 Sports Illustrated Muhammad Ali Legacy Award. Each year SI and the Ali family honor a figure who embodies the ideals of sportsmanship, leadership and philanthropy and has used sports as a platform for changing the world. “I am proud to be able to present this to Colin for his passionate defense of social justice and civil rights for all people,” says Lonnie Ali, Muhammad’s widow. “Like Muhammad, Colin is a man who stands on his convictions with confidence and courage, undaunted by the personal sacrifices he has had to make to have his message heard. And he has used his celebrity and philanthropy to the benefit of some of our most vulnerable community members.”

Previous Legacy winners—including Bill Russell, Kareem Abdul-Jabbar, Jim Brown, Jack Nicklaus and Magic Johnson—were deserving. But no winner has been more fitting than Kaepernick. Ali lost more than three years of his career for his refusal to serve in the military in opposition to the Vietnam War. Kaepernick has lost one year, so far, for his pursuit of social justice.