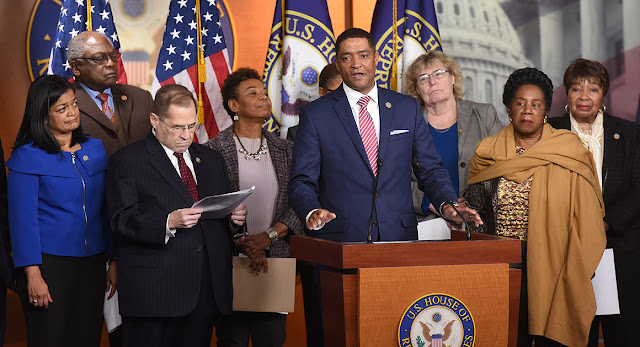 Today, the Congressional Black Caucus (CBC) and the House Judiciary Committee – led by CBC Chairman Cedric L. Richmond (D-LA-02) and Ranking Member Jerrold Nadler (D-NY-10) respectively – introduced a resolution to censure President Trump for the racist “shithole” comments he made about Haiti and African countries during a bipartisan January 11, 2018, meeting on American immigration policy. The resolution currently has nearly 150 Democratic co-sponsors.
Specifically, the resolution censures President Trump for the following:
·         Questioning whether Haitians needed to be included in the compromise. “Haitians, why do we need more Haitians? Take them out,” President Trump said.
·         Referring to African countries as “shitholes” or “shithouses;” and
·         Suggesting that instead of accepting immigrants from predominately black Haiti and African countries, the United States should instead allow more immigration from predominately white countries like Norway.
Joint Statement from CBC Chairman Richmond and House Judiciary Committee Ranking Member Nadler:
“We were deeply disturbed and offended by President Trump’s remarks regarding Haiti and African countries. The countries he called ‘shitholes’ produce immigrants that are remarkable and make significant contributions to our country. A high percentage of those immigrants have college degrees and when they get here they create businesses and jobs.
“These remarks have compelled us to prepare a resolution of censure with our colleagues, to condemn President Trump for his racist statements. This censure resolution is important because America is a beacon of hope. We have to show the world that this president does not represent the real feelings of most of the American people which is part of the reason why he lost the popular vote.
“The President’s bigoted fearmongering is not acceptable and his remarks completely warrant total condemnation and censure from Congress. American immigration policy cannot and should not be guided in any way, shape or form by racism.
“We will be asking Republican Leadership to bring our resolution of censure up for swift consideration and approval. Congress must speak with one voice in condemning these offensive and anti-American remarks. There is no excuse for it.”
In addition to Chairman Richmond and Ranking Member Nadler, co-sponsors include House Democratic Leader Nancy Pelosi, Democratic Whip Steny Hoyer, Assistant Democratic Leader James E. Clyburn, House Democratic Chairman Joe Crowley, and Congresswoman Zoe Lofgren, Ranking Member of the House Judiciary Subcommittee on Immigration and Border Security.
Constituents can become “community co-sponsors” of the resolution by clicking here.
In August, a majority of the CBC and House Judiciary Democrats co-sponsored a resolution to censure President Trump for his “both sides” response to the white supremacist violence in Charlottesville. That resolution was led by Ranking Member Nadler, Congresswoman Pramila Jayapal (D-WA-07), a House Judiciary Committee member, and Congresswoman Bonnie Watson Coleman (D-NJ-12), a CBC member.