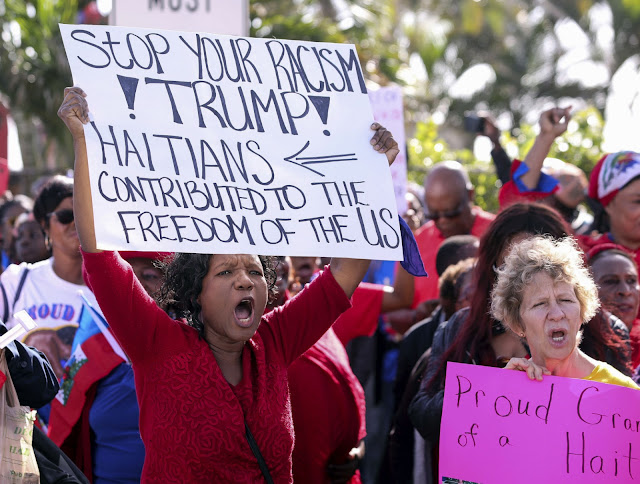 The U.S. Department of Homeland Security’s decision to rescind the Temporary Protective Status (TPS) designation for Haitian immigrants discriminates against immigrants of color, in violation of the Fifth Amendment, according to a new lawsuit filed today on behalf of the National Association for the Advancement of Colored People (NAACP) by the NAACP Legal Defense and Educational Fund (LDF) in the U.S. District Court for the District of Maryland.
The lawsuit claims that the Department of Homeland Security (DHS), former Acting DHS Secretary Elaine C. Duke, and current DHS Secretary Kirstjen Nielson took irrational and discriminatory government action, denying Haitian immigrants their right to due process and equal protection under the Fifth Amendment.  The NAACP, acting on behalf of its Haitian members who are TPS protected, argues that DHS intended to discriminate against Haitian immigrants living in the United States because of their race and national origin.
“This is a simple case. Our democracy rests on the bedrock principle that every person is equal before the law. Governmental decisions that target people based on racial discrimination violate our Constitution,” said Sherrilyn Ifill, President & Director-Counsel of the NAACP Legal Defense & Educational Fund, Inc. “The decision by the Department of Homeland Security to rescind TPS status for Haitian immigrants was infected by racial discrimination. Every step taken by the Department to reach this decision reveals that far from a rational and fact-based determination, this decision was driven by calculated, determined and intentional discrimination against Haitian immigrants.”
“The action by the Department of Homeland Security to rescind TPS status for Haitian immigrants is clearly racially motivated,” said Derrick Johnson, NAACP President and CEO. “The U.S. Constitution prohibits singling out certain immigrants for harsh treatment based on their skin color and/or ethnicity.  But more than that, basic fairness militates against this draconian action taken by DHS under the direction of President Trump.”
The lawsuit seeks to enjoin DHS’s November 2017 decision to rescind Temporary Protective Status for Haitian immigrants, as it reflects “an egregious departure from the TPS statute’s requirements and the intent to discriminate on the basis of race.” The lawsuit also asks the Court to declare that DHS violated the United States Constitution and the rule of law in rescinding the Haitian TPS, and to declare the action void and without legal force.
As evidence of the intent to discriminate, the lawsuit cites public reporting that DHS sought crime data on Haitians with TPS, as well as information on how many Haitian nationals were receiving public benefits. The lawsuit alleges that the Department’s efforts to gather this specific data on Haitian TPS designees “trades on false anti-Black stereotypes about criminality and exploitation of public benefits, and suggests the effort to manufacture a public safety rationale for the planned rescission.”
The complaint further alleges that President Trump’s public hostility toward immigrants of color was a contributing factor in the decision to rescind Haitian TPS. For example, in a recently reported White House meeting with several U.S. Senators, Trump disparaged a draft immigration plan that protected people from Haiti, El Salvador and some African countries, and noted his preference for immigrants from mostly white European countries.  Earlier in 2017, the President suggested that Haitians “all have AIDS,” upon learning that 15,000 Haitians had received visas to enter the United States. He reportedly asked, “Why do we need more Haitians?”
“It’s disheartening to see the Haitian community targeted and mistreated in this way, but it also is not surprising,” said Raymond Audain, Senior Counsel at LDF. “This decision reflects a shameful and persistent pattern of conduct by this Administration in which racial stereotypes drive policy decisions.”
Haitian immigrants first received Temporary Protective Status in 2010 as part of the Department of Homeland Security’s efforts to assist the country after it was struck by a 7.0 magnitude earthquake, one of the deadliest earthquakes in history. Haiti’s TPS designations have been extended multiple times due to many factors, including multiple hurricanes and a cholera outbreak. On November 20, 2017, the DHS announced its plans to terminate temporary protective status for Haiti, which would go into effect in May 2019, ignoring bipartisan pleas to extend TPS designation for Haitian immigrants.
“Our great nation fought a civil war to establish the bedrock principle that the government may not discriminate against any person, whether citizen or non-citizen, based on that person’s race or ethnicity.  The NAACP stands ready to challenge any violation of that principle, as today’s action clearly demonstrates,” said Bradford M. Berry, General Counsel of the NAACP.
The full complaint can be read here.