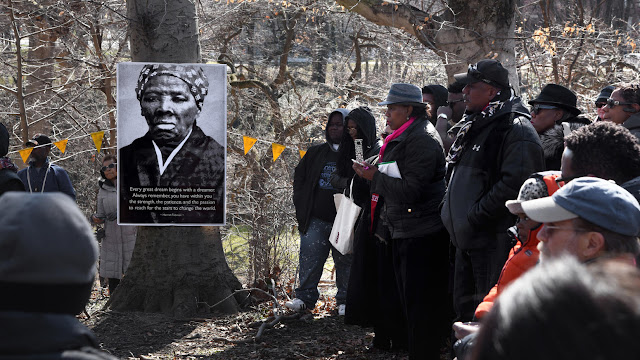 More than 200 local residents and elected leaders gathered in a tree-lined corner of a Baltimore park Saturday to rededicate the space, which had long venerated two Confederate generals, to the famed abolitionist and Underground Railroad conductor Harriet Tubman.

“We stand on the shoulders of this great woman,” said Ernestine Jones-Williams, 71, a Baltimore County resident and a Tubman family descendant who spoke on behalf of the family. “We are overwhelmed. Overwhelmed. Thank you, and God bless you.”

The ceremony in Wyman Park Dell, on the 105th anniversary of Tubman’s death, took place feet from the now-empty pedestal of a large, bronze, double-equestrian statue of Confederate Gens. Robert E. Lee and Stonewall Jackson, and officially renamed the space Harriet Tubman Grove.

At the event Saturday, city officials and local residents cited the events in Charleston and Charlottesville, but largely focused on more local efforts to have Baltimore’s statues removed, including a grass-roots petition drive.

They said the removal of the statues has imbued the spaces where they once stood, such as the Harriet Tubman Grove, with their own symbolic power.

“Since the removal of the Lee-Jackson statue, this park has become a gathering place for city residents of all backgrounds to meet, talk and enjoy the location as a space that symbolizes hope and positive change,” said Ciara Harris, chief of staff to Baltimore Recreation and Parks Director Reginald Moore. “Harriet Tubman Grove will provide the city an opportunity to correct historic injustice to a Maryland native. Our city is properly recognizing an African-American hero.”