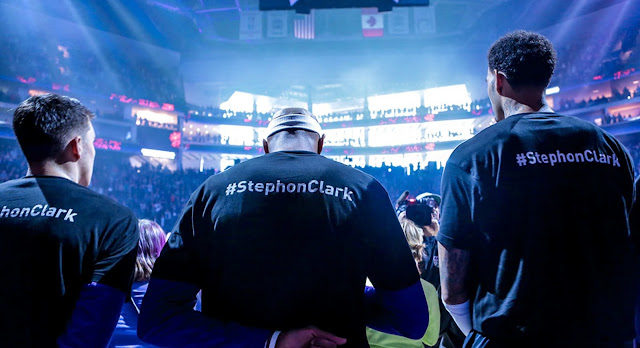 On Wednesday, the Sacramento Kings announced a partnership with the Build. Black. coalition – a group of community leaders who have organized in the wake of the Stephon Clark tragedy – and Black Lives Matter Sacramento, in their dedication to fundamentally transform black communities and support black youth in the Sacramento region.

“More than anything, I’m proud of Sacramento and proud of the Kings,” said NBC Sports analyst Doug Christie prior to Thursday’s game against Indiana. “We talk about Sacramento Proud – I think now more than ever, it’s not a just an idea, it’s real.”

As part of the commitment, the Kings will establish an education fund for Clark’s children and create a multi-year plan in partnership with Build. Black. to support the education of young people – providing workplace preparation and economic tools needed to build an efficacious future.

“That means a great deal,” said Garrett Temple on Thursday night. “What Vivek said after the [March 22] game wasn’t just talk, we wanted to step in and help the community with this problem.”

“It’s real important, it’s about how we can listen to people and bring some smiles to kids’ faces in the midst of what is going on,” continued Temple. “We have to use that influence we have in a positive manner.”

“It’s a touchy, sensitive subject but it is something that needs to be done,” said Carter. “We need to educate ourselves on both sides of the fence.”

The group will be part of a panel of powerful voices in the community helping to facilitate an open dialogue, and ultimately healing.

“Our team was saved by our community, so it’s only right that it comes full circle,” concluded Christie.