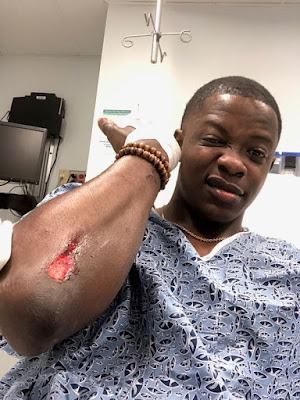 A 29-year-old man credited with saving numerous lives Sunday morning after he disarmed a man who opened fire on an Antioch Waffle House said he was just trying to stay alive.

James Shaw Jr., 29, said after feeling cornered he saw an opportunity to tackle the man shooting into an Antioch Waffle House. He said he doesn’t feel like a hero.

Police spokesman Don Aaron told reporters Sunday morning that the Waffle House hero rushed the suspected shooter, disarmed him and threw the assault rifle he was carrying over the counter.

“I don’t really know, when everyone said that (of being a hero), it feels selfish,” Shaw Jr. “I was just trying to get myself out. I saw the opportunity and pretty much took it.”

The "hero" suffered an injury to his elbow, along with some other abrasions, Aaron said. He was taken to TriStar Southern Hills Medical Center, was treated for minor injuries and released, according to a hospital spokeswoman.

Shaw Jr. can’t recall how many shots there were, just that a man was on the floor. Shaw Jr. said he jumped toward the bathroom and the suspect shot in that direction. He said he was grazed by a bullet. "I remember I was like ‘Dang, I’m basically in a barrel,’ ” Shaw Jr. said. “There is no place for me to go.”

As the suspect came through the door, he needed to reload, Shaw Jr. said. That’s when he said he rushed him.

“When he came in, I distinctively remember thinking that he is going to have to work for this kill,” Shaw Jr. said. “I had a chance to stop him and thankfully I stopped him.”

He added: “I grabbed the gun and kept it down. He had one hand on it. I pulled it away and threw it over the bar.”

Shaw Jr. said the suspect took himself outside and walked quickly away. He didn’t follow him for fear that he had another gun. The man was clothed only in a green bomber jacket, Shaw Jr. said.

Shaw Jr. said not soon after he flagged down drivers to call 911.

"While I was in hospital, a girl that was there said you saved my life," he said. "I didn’t do it to be hero."