Trump pardoning Jack Johnson would be nice, BUT... 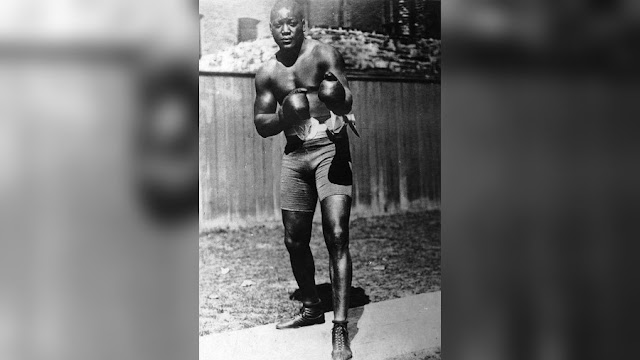 Trump pardoning Jack Johnson would be nice, BUT

This past weekend Trump tweeted that he was considering pardoning Jack Johnson, the first African American world heavyweight boxing champion. Trump posted this after talking to that great civil rights activist Sylvester Stallone ( Just joking, I loved Stop! Or My Mom Will Shoot ) who pleaded Johnson's case.

There's a part of me thinking that this would be nice and that there's never a wrong time to do the right thing. Now the cynical part of me can hear Trump asking, "Who the hell is Jack Johnson and will pardoning him make the blacks like me?"

Now we can all be cynical, like me and question Trump's true motives but pardoning Jackson is something that would make the legendary boxer's family happy and quite a few people in the black community happy as well. But other than make a few people smile it won't do anything for the African American community at all.

If Trump pardons Jackson he will still not have done anything in regards to housing, education, policing, environmental issues, or civil rights issues. All REAL problems that affect African Americans daily. He's been in office a year and has shown no inclination to tackle these issues.

The proof is the people he has put in control of HUD, Education, and the EPA Ben Carson, Betsy DeVos, Jeff Sessions and Scott Pruitt. That's one hell of a middle finger that he's giving to African Americans.

Now his base on those few black sycophants (Hello, Ben Carson) around him will point to such a pardon and state that Trump does care about black people. It only shows that Trump cares about Trump, the man has no idea who Johnson was (hell, he may think he's still alive) and only cares if such a move would raise his dismal poll numbers among African Americans.