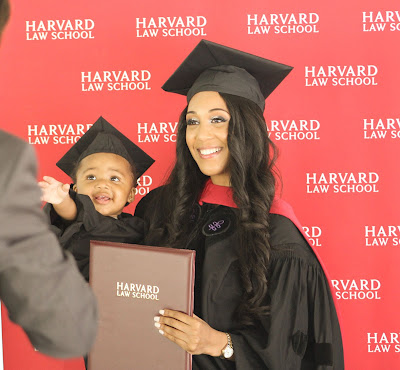 Becoming a lawyer was always a goal for Briana Williams. But when she became a single mother a year before finishing her Harvard law degree, her dream seemed almost impossible. The 24-year-old shared a candid post about how she decided to complete a final exam in April 2017 while in labor before heading to the hospital to give birth.

“I immediately requested an epidural so that my contractions wouldn’t interfere,” the mom writes. “To say that my last year of law school, with a newborn, and as a single mom was a challenge would be an understatement.”

Beating all odds and statistics, Williams walked across the graduation stage with her adorable mini-me, Evelyn, the two of them wearing matching caps and gowns.

Williams tells Yahoo Lifestyle that the road to success wasn’t easy, and there were times when she thought she couldn’t do what she needed to do.

“There were many days that I’d go into a depression because I felt overwhelmed and let the pressure of what I was trying to do get to me. I suppose I just did what I had to do, regardless of how I felt on the inside, because I did not want people to be able to say that I had to choose between motherhood and success,” she reveals. “I refused to allow anyone to assume that my daughter could hold me back in any way when she is such a fundamental piece of my success and courage. I knew that if I persisted, I could help other similarly situated women.”

I went into labor in April- during final exam period. I immediately requested an epidural so that my contractions wouldn’t interfere with my Family Law grade. And, with tears in my eyes, I finished it. This “biting the bullet” experience is quite quintessential of my time at Harvard. To say that my last year of law school, with a newborn, and as a single mom was a challenge would be an understatement. Some days I was so mentally and emotionally fatigued that I did not leave my bed. I struggled with reliable childcare. It was not atypical to see me rushing through Wasserstein to the Dean of Students’ office with Evelyn in her carriage, asking DOS can they keep her for a few until class was over. If not, she’d just have to come with me to class. Evie attended classes often. So I’m going to be honest with you guys.. I didnt think I could do it. I did not think that, at 24 years old, as a single mom, I would be able to get through one of the most intellectually rigorous and challenging positions of my life. It was hard. It hurt. Instagram can make peoples’ lives seem seamless, but this journey has been heartwrenching. However, I am happy to say that I DID do it. Today, Evelyn in my arms, with tears streaming down my face, I accepted my Juris Doctor from Harvard Law School. At first, I was the anomaly of my [marginalized] community. Then, as a single mother, I became a statistic. Next, I pray that- for the sake of my baby, I will be an example. Evelyn- they said that because of you I wouldn’t be able to do this. Just know that I did this BECAUSE OF YOU. Thank you for giving me the strength and courage to be invincible. Let’s keep beating all their odds, baby.