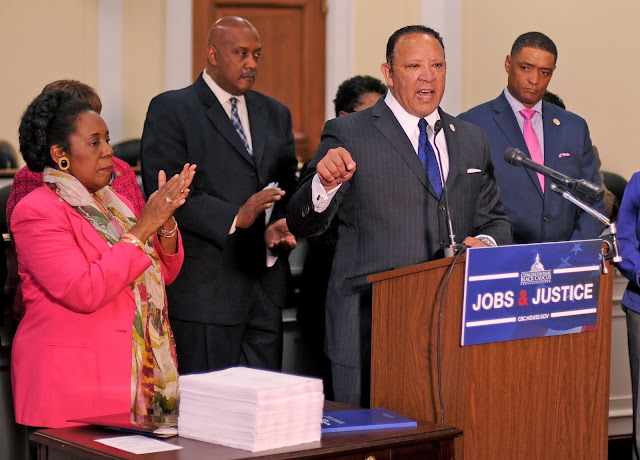 The Jobs and Justice Act of 2018 is the Legislative Version of the “We Have A Lot To Lose” Policy Document that the CBC Hand-Delivered to Trump.

Today, the Congressional Black Caucus (CBC) – led by CBC Chairman Cedric L. Richmond (D-LA-02) – announced the introduction of the Jobs and Justice Act of 2018, 1,300-page omnibus legislation that would, if passed, increase the upward social mobility of Black families, and help ensure equal protection under the law. The CBC hopes the legislation will serve as a guiding light for any White House, major legislative caucus, or member of Congress who claims to care about the African-American community, other communities of color, and rural communities.
Chairman Richmond said:
“President Trump and the Republican Party he leads would have you believe that our community is doing well because African-American unemployment is at a historic low, which is the result of policies and programs implemented by the Obama Administration. But the African-American unemployment rate is not a good barometer of our community’s success. When African Americans were slaves and sharecroppers, African-American unemployment was 0 percent. But I don’t think anyone would say that our community was doing well then. As a result of racism and discrimination in our country, African Americans still face a number of economic and social barriers that the federal government can and should help our community address since it was and still is complicit in building them. Although we have come a long way, we still have a long way to go, and the Jobs and Justice Act of 2018 will help us get there.”
On the campaign trail, then-candidate Donald J. Trump asked the African-American community “What do you have to lose?” in reference to the possibilities of a Trump Administration. When the CBC met with President Trump in March 2017, the Caucus answered his question in the form of a 130-page policy document titled, “We Have A Lot to Lose: Solutions to Advance Black Families in the 21st Century.” President Trump and his Administration never responded to the document. In fact, he and his Administration haven’t responded to 99% of the letters that the CBC has sent them.
Since that time, President Trump has taken numerous actions that threaten the African-American community, from proposing massive cuts to programs that help families in need, to failing to do anything to rebuild the bonds between police and the communities they serve. Now, the CBC has turned the “We Have A Lot To Lose” policy document into omnibus legislation. In addition to including bills introduced by almost every member of the CBC, the legislation includes the National Urban League’s Main Street Marshall Plan to address economic and social inequities and injustices.
Highlights from the Bill
Jobs
Justice