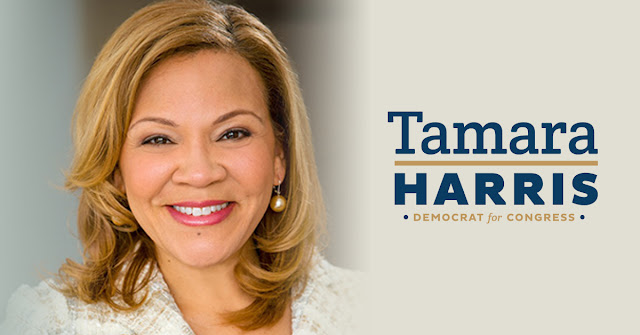 Tamara Harris is a family advocate who helps families heal when facing challenging circumstances. A mother herself, she coaches and advises clients and their children in the U.S. and internationally on strategies to become better champions for themselves and children, both in their personal and professional lives. Navigating family difficulties is not new to Tamara. In fact, that is one of the reasons she is running for Congress today.

Tamara witnessed first-hand the importance and hardships of healthcare. Her father, who in his younger years worked as a train porter, passed away after a protracted battle in his later years. During the course of his illness, his medical insurance became insufficient and he had to rely upon Medicare and his only daughter to fund his care. Tamara understands that while she was blessed with the ability to care for her father and was supported by many in that care, this is not the case for many families in New Jersey.

She has sat with mothers and students in social service organizations to help them advocate for their mental health or the mental health of their children. Tamara has mentored students in her capacity as an adjunct lecturer at Montclair State University and New York University. She has served in leadership positions for education organizations that assist low-income and minority students. This includes the United Negro College Fund and the New Jersey Advocates for Education, where she raised more than $1 million to fund merit and need based collegiate scholarships for students residing in cities within Essex County. She has also served on the advisory board of Big Brothers and Big Sisters of Essex, Hudson, and Union County in NJ.

Tamara is also an accomplished businesswoman who received her BA and MBA from the University of Pittsburgh. She previously worked for the Prudential Asset Management Group and she would later go on to have a successful career in international finance in the Hong Kong offices of Citigroup and Deutsche Bank. Her business career taught her the value of fostering innovation and creativity to solve problems.

Tamara has also been deeply involved in the democratic process supporting candidates and organizations at the county, state, and federal level. Now, after hearing from family, friends, colleagues and residents of New Jersey’s 11th Congressional District calling on her to serve, Tamara has decided to use her experience as a family advocate, philanthropist and problem solver to fix Washington.

After 22 years of ineffective representation, Tamara Harris will bring fresh and unique perspective to the way we approach important policy matters. She is running because the diverse peoples of NJ-11 need a representative that will be leader in Washington, not a follower. As she has done throughout her entire career, Tamara will fight to make sure that every New Jersey resident has an opportunity to thrive and will always put working and middle class families first.