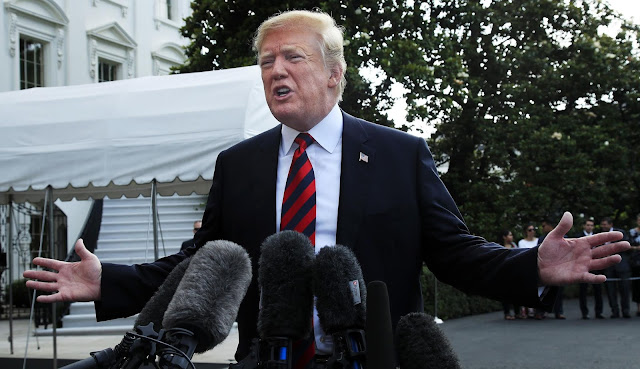 With the backdrop of the positive response to his pardon of Alice Johnson and the National Anthem controversy in which National Football League players are protesting police brutality and racism, President Trump in his tone-deaf way has made an offer to black athletes in the NFL to submit cases of possible injustice so he can evaluate them for potential pardons.

"I’m going to ask all of those people to recommend to me -- because that’s what they’re protesting -- people that they think were unfairly treated by the justice system,” Trump told reporters Friday before departing the for the G-7 summit in Canada, adding that they shouldn’t remain in the locker room while the national anthem is played before games.

"If I find, and my committee finds, that they’re unfairly treated, then we will pardon them, or at least let them out," the president said.

While Trump's offer to pardon those in federal prison may help dozens it does nothing to help thousands who suffer at the hands of the justice system and abusive policing. Trump is hoping that African Americans somehow fall for this PR stunt and see this as a move that benefits them a whole when it doesn't.

Police committing acts of brutality and shooting unarmed black men. Until there are tougher consequences at the Federal level for bad police officers who violate the HUMAN rights of American citizens these abuses will continue.

Environmental issues that affect black communities that lead to learning and behavioral problems that can make a child more likely to end up in the criminal justice system.

This is by no means an exhaustive list, these are things that immediately sprung to mind upon hearing of Trump's offer to NFL players.

This is just another example of Trump pointing to the bright shiny object hoping that we all ignore the grim reality that needs to be addressed. Pay attention people and don't let this con-man get with pulling yet another PR stunt that doesn't benefit African Americans as a whole.

So, in light of Trump's misguided offer to pardon boxing legend Muhammad Ali whose conviction was overturned by the Supreme Court in 1971 I would like to close by warning us all not to fall for the okey-doke.