Will you be buying Omarosa's book on her time in the White House? 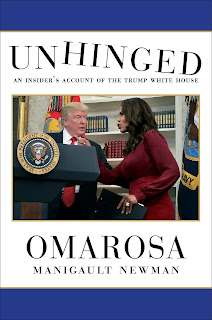 Here's the book's blurb from Amazon:

The former Assistant to the President and Director of Communications for the Office of Public Liaison in the Trump White House provides a jaw-dropping look into the corruption and controversy of the current administration.

Few have been a member of Donald Trump’s inner orbit longer than Omarosa Manigault Newman. Their relationship has spanned fifteen years—through four television shows, a presidential campaign, and a year by his side in the most chaotic, outrageous White House in history. But that relationship has come to a decisive and definitive end, and Omarosa is finally ready to share her side of the story in this explosive, jaw-dropping account.

A stunning tell-all and takedown from a strong, intelligent woman who took every name and number, Unhinged is a must-read for any concerned citizen.

Now, the book will probably sell very well, but I won't be one of those buying it. I can't in any way support this woman who would sell out the entire African American community and was only in the whole thing for a title, and the money that would come after she served in Trump's administration. I want to read the book, but I won't be paying for it and enriching Omarosa, maybe I'll get it at the local library, borrow someone else's copy, or wait for the Lifetime movie.

Will you buy the book?