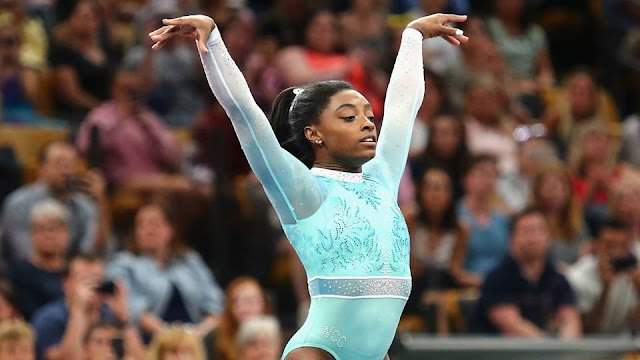 Simone Biles, in the second meet of her comeback, won her record fifth U.S. all-around title and swept the four apparatus titles, combining scores from Friday and Sunday at TD Garden.

She never thought it would be possible, but she also wants to work on pre-meet nerves, consistency and confidence.

“I’d give it a B-plus,” Biles told Andrea Joyce on NBC.

The four-time Rio Olympic gold medalist became the first woman to win all five golds at the national gymnastics championships since Dominique Dawes in 1994.

She won the all-around by 6.55 points over 2017 World all-around champion Morgan Hurd, the largest margin since the perfect-10 system was thrown out in 2006. That gap is larger than that separating Hurd from the 11th-place gymnast.

“I knew I was capable of [scoring this well], but I kind of thought I was going to be a nervous wreck and maybe fall apart,” said Biles, who wore a teal mint leotard in part to stand with fellow Larry Nassar sexual-abuse survivors (teal ribbons were worn at NCAA meets in the winter and spring). “Going into these events, I know I kept telling my family like I don’t know if I’m going to be able to calm myself down the way I did before and handle the nerves, but so far, so good.”