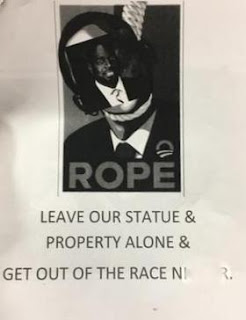 The FBI and Louisiana State Police are investigating a Shreveport an African American mayoral candidate's claims that he was anonymously threatened with lynching if he did not drop out of the race, a state police spokesman said Thursday.

Caddo Parish Commissioner Steven Jackson said Wednesday that he was threatened anonymously with lynching if he did not drop out of the race for Shreveport mayor. He said he reported the threat online to state police.

Trooper Glenn Younger, a state police spokesman in Bossier City, said his agency received Jackson's report Thursday morning. He said that state police and the FBI would handle the investigation, with the FBI taking the lead.

Jackson, in a news conference Wednesday, said someone placed an envelope containing a sheet of paper with a threatening message at the Jackson family home on Ashton Street.

A copy of the sheet, which Jackson provided, depicts Jackson's face crudely placed on top of a head in a noose. The word "Rope" appears at the bottom.

These type-written words then appear below the image: "LEAVE OUR STATUE & PROPERTY ALONE & GET OUT OF THE RACE N-----."

The image mimics a famous poster promoting former President Barack Obama, although the word "Hope" on the original has been changed to "Rope."

Eric Rommal, special agent in charge for the FBI in New Orleans, said the agency is aware of "incident in Shreveport" and is contact with state and local authorities.

"If in the course of the local investigation, information comes to light of a potential federal offense, the FBI is prepared to investigate," Rommal said in an email. "The FBI takes seriously all acts or threats of violence and is committed to investigating crimes that are potentially motivated by hate."

The use of the word "statue" is an apparent reference to Jackson's October vote as a parish commissioner to remove the Confederate monument that stands on the Texas Street side of the Caddo Parish Courthouse in downtown Shreveport. The commission voted 7-5 for removal.

Jackson has said he does not personally live at the Ashton Street house where the envelope and threatening message were left.

The paper does not identify who made or left it at the home. Nor did the envelope, Jackson said.

Jackson said he also received a threatening call earlier this week. The call was from an unknown number, he said.

“I’ve also received harassing calls saying ‘Get out of the race, N word, or we will release these reports on you,” he said.

Jackson said the message left at his home was evidence of a "hate crime."

He said he did not report the threatening message to the Shreveport Police Department or the Caddo Parish Sheriff's Office. One reason he didn't report it to the police department, he said, is that as a candidate for mayor he has criticized Police Chief Alan Crump.

“We feel comfortable putting this either at the state or federal level. I think they have the resources best to investigate it,” Jackson said.”SPD needs to be working on the crime issue.”

Jackson added that he will not drop from the mayor's race.

“To the persons who place these racist messages at our doorstep, we love you,” he said. “We want to let you know we love you.”

Jackson was elected to the Caddo Parish Commission in 2016 and is one of eight candidates for Shreveport mayor.