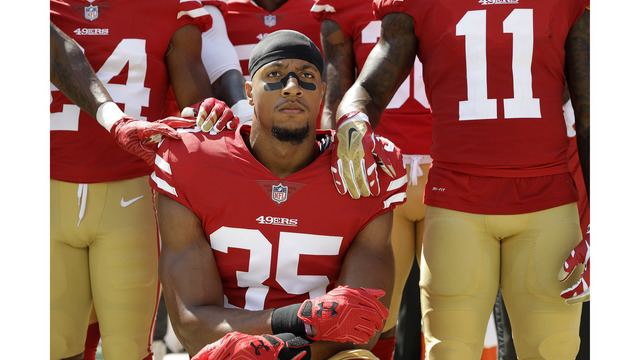 NFL safety Eric Reid signed with the Carolina Panthers Thursday, in a move that could complicate his suit against the league over his protests during the National anthem.

Reid, who was the first to join Colin Kaepernick in kneeling during the National Anthem to protest policy brutality and systemic racism, claims he lost his job with the San Francisco 49ers and was blackballed from the league over his protests.

"We made this decision based on the fact he's a good football player,'' Panthers owner Marty Hurney told ESPN. "He's played at a very high level the last few years. We think he can come in and help us win games.''

Kaepernick, who is more popularly associated with the protests, congratulated Reid on Thursday.

Congrats to my brother @e_reid35, all pro safety who should have been signed the 1st day of free agency, who has signed a football contract.

He was the first person to kneel alongside me. Eric is a social justice warrior, continues to support his family. and communities in need.