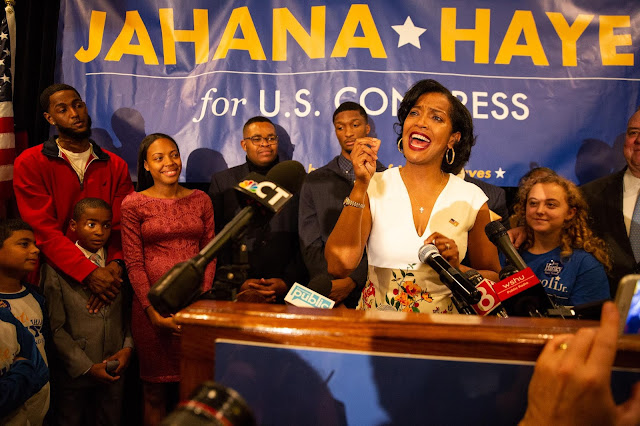 Driven by a powerful personal narrative, a network of young volunteers and public speaking skills honed in her years as a teacher, political newcomer Jahana Hayes made history Tuesday, becoming the first African-American woman to represent Connecticut in Congress.

Hayes scored a solid victory over Republican Manny Santos, the former mayor of Meriden and a social conservative who struggled to raise money.

“People have said to me: ‘She doesn’t have what it takes,’” said Hayes, a former national teacher of the year from Waterbury. “Not only am I built for this, I’m Brass City built for this.”

She told her supporters she couldn’t have done it alone.

“You … believe that we have to protect the future that we promised for our kids,” she said. “You also believe that we have an obligation to be of service to someone else ... that true leaders lead from the front and lead by example, and reject all of this hate and intolerance and this indescribable fear that does not define who we are.”

Hayes’ apparent victory in the 5th Congressional District is part of a broader racial and ideological shift within the Democratic Party. Like other Democrats who are shaking up the party establishment, she embraced progressive policies and won the endorsement of organized labor and the Working Families Party. Hayes held a lead of several percentage points in early results although larger cities including Waterbury and Torrington had yet to fully report results.

In addition to being the first African-American Connecticut has elected to Congress since Republican Gary Franks held the 5th District seat in the 1990s, Hayes would join fellow Democrat Ayanna Pressley of Boston as the first women of color from New England to serve in the House.