NAACP urging Facebook users to logout in protest on December 18 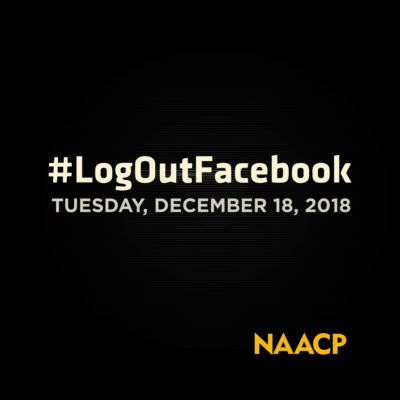 Facebook’s engagement with partisan firms, its targeting of political opponents, the spread misinformation and the utilization of Facebook for propaganda promoting disingenuous portrayals of the African American community is reprehensible.

NAACP remains concerned about the data breaches and numerous privacy mishaps that the tech giant has encountered in recent years, and is especially critical about those which occurred during the last presidential election campaign.

Facebook’s commitment to the Honest Ads Act – an act that would mandate that political ads be clearly labeled as such – was a good first step towards reconciliation of their gross negligence – however much more needs to done to ensure that African Americans will not unfairly bear the brunt of Facebook’s business model.

In March 2018, press reports revealed that Cambridge Analytica, a British big data firm, gained access to the personal information of 87 million Facebook users without the users’ consent. The misuse of data of 87 million users was negligent at best and exploitative at worst.

Earlier this year, the National Fair Housing Alliance filed a lawsuit alleging that “Facebook continues to enable landlords and real estate brokers to bar families with children, women, and others from receiving rental and sales ads for housing. Facebook has created a pre-populated list of demographics, behaviors, and interests that make it possible for housing advertisers to exclude certain home seekers from ever seeing their ads.”

Recent revelations that Facebook hired an opposition research and its work with other deeply partisan strategy firms call into question the notion that Facebook operates with a non-partisan view.