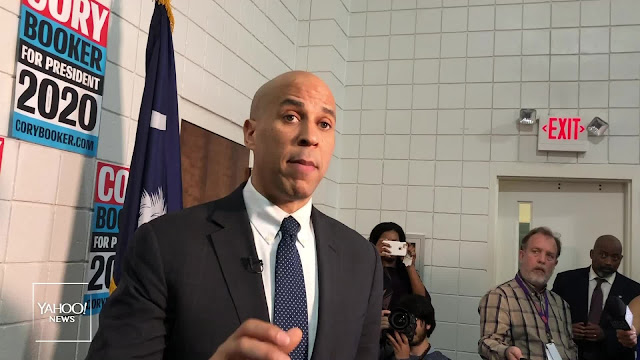 New Jersey Sen. Cory Booker responded Friday to critics who believe he should unequivocally call President Trump “a racist.” Booker, campaigning for president at Reedy Fork Baptist Church, said he has been “very focused” on fighting Trump’s “racist and harmful policies” and is less concerned with “how you label” the president. He also accused Trump of emboldening white supremacists in the country.

Yahoo News asked Booker how he felt about the distinction at his event on Friday. He offered a lengthy critique of Trump’s positions on racial issues.

Booker went on to note FBI data showing that the number of hate crimes in the country spiked in 2017, Trump’s first year in office.

“We’ve seen unfortunate reports of biased incidences going up. I believe we need to protect ourselves and our communities and our neighborhoods from the kind of racist policies and actions that we see coming from this president,” Booker said. “It’s deeply unfortunate that this is a man who … can’t condemn Nazis … a guy who, literally, you see white supremacists using his language in their own materials.”

Booker added that Trump’s behavior has been “unacceptable” and is “something we should stand up against.”

“This is something that I’m very focused on from the time that I’ve been in office. I want to stand strong against the kind of policies that are hurting people,” said Booker.

After his extended criticism of the president, Yahoo News pressed Booker on whether he thought Trump was a “racist.”

“I’m less concerned about how you label him than I am about protecting people that he’s hurting and protecting against his racist and harmful policies,” Booker said.

Posted by Councilman George L. Cook III at 9:05 AM