Harlem Heat to be inducted into the WWE Hall of Fame 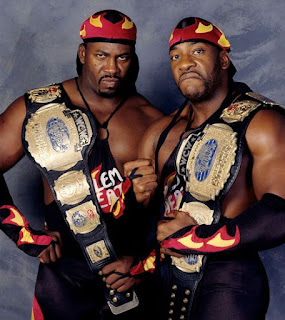 Although the tag team never wrestled in the WWF/WWE, the 10 time WCW tag team champions Harlem Heat are to be inducted into the WWE Hall of Fame as part of the 2019 class.

The team is made up of WWE Hall of Famer Booker T (Robert Booker) and his brother Stevie Ray (Lash Huffman).

This also means Booker will become a two-time Hall of Famer, as he was inducted as a singles wrestler in 2013.

It was surprising, actually, I guess because one reason, my brother and I, we never actually wrestled in the WWE. My brother took a step aside at that point in time because he had a daughter, and he wanted to see her grow up and see her go to college. He got a chance to do that. But our career in WCW was awesome.

Harlem Heat joins a Hall of Fame class that includes D-Generation X, The Honky Tonk Man and Torrie Wilson. The WWE Hall of Fame induction ceremony will air on the WWE Network on Saturday, April 6th, at 8:00 p.m. ET.