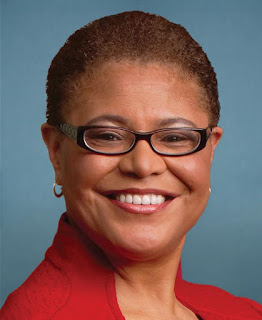 WASHINGTON - Today, Rep. Karen Bass (D-Calif.), Chair of the House Judiciary Subcommittee on Crime, Terrorism and Homeland Security, delivered the following remarks at a press conference about the introduction of the “Violence Against Women Act of 2019”:
“Thank you very much, thank you very much Mr. Chair, and thank you, Madame Speaker, for leadership on not just this issue, but of our House.
“Today is a very important day for survivors everywhere. We are here to follow through on the pledge we made to the American people when we said we will deliver in this 116th Congress.
“We said reauthorizing the Violence Against Women Act (VAWA) was a priority in the first 100 days of this Congress, and today, we are keeping our word by introducing the bipartisan Violence Against Women Act of 2019.
“I welcome my co-sponsor Mr. Fitzpatrick, who joins me in introducing this monumental piece of legislation, the Violence Against Women Act of 2019, which builds upon the amazing progress made under the leadership of my colleague, Congresswoman Sheila Jackson Lee, in the last Congress.
“This year we celebrate the 25th Anniversary of VAWA, and on this very day, March 7th, President Barack Obama signed our last VAWA reauthorization in 2013.
“And today, on the 6th year anniversary of VAWA’s last passage, we are holding this press conference to address the urgency of now in reauthorizing this vital legislation.
“For centuries, women have fought vigorously to demand changes in our federal laws, not simply for their own benefits, but for others as well.  VAWA is no exception in that regard.
“Women have stood up for themselves -- for men and for their children -- and have said NO MORE.”