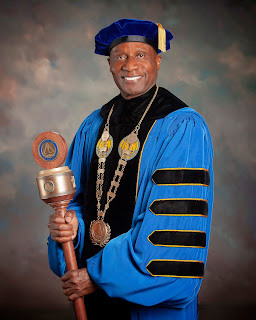 Dozens of supporters filled the seats of the Neal-Jones auditorium Friday to celebrate the next chapter in Morris College history, led by Dr. Leroy Stagger as the College’s tenth president.

The ceremony began with an African Welcome by the Caroline Mack Center for the Arts and a drum performance by Ms. Natalie Williams and Mr. Jamey Johnson. The college’s choir direct, Mr. Herbert Johnson led the crowd to sing the National Negro Anthem before Dr. Mack T. Hines, Immediate Past Chairman of the Morris College Board of Trustees (BOT) gave a ceremonial welcome.

The purpose was given by the Co-Chair of the Presidential Investiture Committee, Elder J. Elbert Williams followed by the Invocation given by Dr. Jamey O. Graham, Vice President at Large of the Baptist Education and Missionary Convention of South Carolina, Inc.

The crowd was moved by the chilling vocals of soloist Thelma Isaac as she sang Amazing Grace following the scripture reading and The Lord’s Prayer, before the presidential response.

Jane Luther Smith, Senior Instructor of Music at the University of South Carolina-Sumter, played a musical piece on the piano following the greetings.

The college has not had an investiture ceremony in over four-decades since Dr. Luns C. Richardson was named the college president in 1974. Dr. Richardson transitioned in 2017 following retirement.

He challenged Dr. Staggers to remain a role model and continue to transform lives.

Upon receiving his robe, medallion and mace, the newly named tenth president of Morris College stood before the crowded auditorium and delivered his Presidential Response.

Dr. Staggers acknowledged the ninth president for being a great leader while he served under him for nearly two decades.

“My vision for Morris College is to build onto the great achievements of Dr. Richardson.”

“I had the blessing and good fortune to sit under Dr. Richardson as dean for 17-years,” he boasted proudly into the crowd.

He spoke on the transformations that the college has made for over a century, producing great scholars since the campus was chartered in 1911 with just two wooden buildings to house the college courses.

Dr. Staggers responded to the presidential charge with confidence and high esteem.

“Dr. Lomax, I understand the hopes, dreams, and ambitions of our students and their parents. Therefore I do accept this challenge, and I will be a student-centered and student-focused president. I will work diligently to keep students front and center, in all of my decisions. For all of the students that come through the Morris [College] gate, I will lead the faculty and the staff to ensure that students do learn and learn well and become college graduates and depart to serve. Together with the faculty, staff, and other constituents, we will motivate students, encourage them and nurture them. We will see to it that each becomes a successful college graduate. We will help students to realize their true potential and use it. Dr. Lomax, I concur wholeheartedly with you, 100 percent, about the benefits and value of a college degree. I commit today to a laser-focused purpose on this goal of creating college graduates of those students that enter our gate. “

He accepted the challenge to remain committed through all of the institution's trials and tribulations and asked for God’s guidance in getting him through all there is to come.

“I ask for God’s guidance, I pray for courage, and I know I can do all things through Christ who strengthens me.”