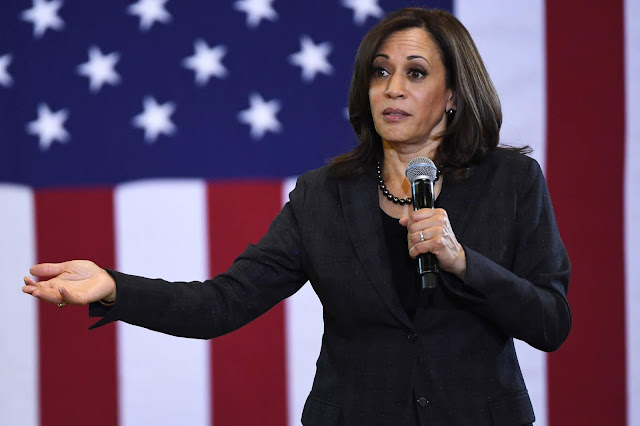 In the interest of full disclosure let me state that I am not a Kamala Harris supporter but I am a Democrat and as one I will support the winner of the Democratic primary. My purpose of writing this op-ed is to warn all Democrats, both progressive and moderate about ideological purity test hurting the party.

President Lyndon Johnson has been quoted as saying "You know the difference between cannibals and liberals? Cannibals only eat their enemies."

That statement is becoming even more true with upcoming 2020 Democratic Presidential Primary which is turning into a battle between moderate and progressives.

That brings me to a USA Today opinion piece written by Progressive Peter Funt who is a writer and host of "Candid Camera." Peter Funt writes that Kamala Harris should be qualified because she owns a gun. The argument he makes is that Harris' gun ownership somehow makes her less credible or hypocritical when it comes to gun control.

Harris owns a gun as someone who was a former prosecutor who had reason to worry about her safety. She keeps the firearm locked up and in a safe place in her home. Funt's arguments is another example of a purity test that doesn't help Democrats win the presidency in 2020.

The fact is many Democrats are okay with gun ownership but what common sense gun laws when it comes to who can own a gun, what types of firearms are legal, and how many guns one person can have. Most of us want laws that will prevent mass shootings and keep our children safe in schools.

Funt's rhetoric not only hurt Harris in this case but Democrats as a whole.

Here are three ways it hurts us Democrats:

1. The op-ed plays right into fringe right-wing fears that Democrats believe no one should own a gun and that the government wants to take their guns. A master charlatan like Trump would capitalize on that to remain, President of the United States.

2. This purity test will disqualify potentially good candidates like Harris, Beto O'Rourke, and Pete Buttigieg who also own guns. I don't think that what anyone wants as we want the best candidate up against Trump.

3. Fighting against gun ownership will hurt Democrats in swing states like Michigan, Ohio, Pennsylvania, and Wisconsin. All states that Trump won and that Democrats need to retake the presidency.

I think those are three important reasons to back off the gun purity test.

In closing I would like to state that we as Democrats have to be careful about how candidates and their supporters go after each other during the primary season. The reason being that the winner of the Democratic Party will need to bring the party together after the primary season.

I don't care if you label yourself as liberal, moderate, or progressive Democrat, at the end of the day we are all Democrats, and we have to stop cannibalizing ourselves, or we will hand Trump a second term.

What's it going to be?