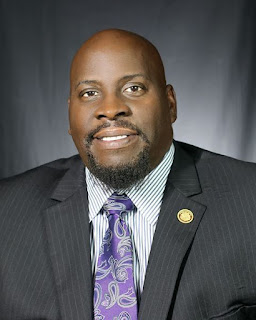 Harris-Stowe State University is pleased to welcome Dr. Dwayne Smith as the University’s Interim President. Dr. Smith will replace Dr. Dwaun Warmack, who announced his resignation earlier this summer to pursue a presidency at another university. Dr. Smith begins his tenure on August 1, 2019 and will serve until a full presidential search is completed.

Smith is no stranger to Harris-Stowe. He is currently in his 12th year as Provost and Vice President for Academic Affairs at the institution, and overall has more than 30 years of progressive administrative and faculty experience in higher education.

Dr. Smith is well-versed in accreditation, enrollment management, student success, strategic planning, faculty and staff development, and obtaining external funding. Since his arrival to Harris-Stowe, he has successfully procured more than $12 million in external funding for various university initiatives. He successfully led the institution through five major accreditations, currently serves as a Peer Reviewer for the Higher Learning Commission, is the Principal Investigator of a $5 million National Science Foundation grant to substantially strengthen Science Technology, Engineering and Mathematics (STEM) in the state of Missouri, and serves as a Grants Reviewer for the National Science Foundation.

Under Dr. Smith’s leadership, the institution has increased its degree offering by more than 75%, developed undergraduate research opportunities, added STEM degrees and increased its yearly degree production—ranking as one of the top five institutions in Missouri in awarding undergraduate degrees to Minority Students. Additionally, Harris-Stowe ranked in the top 40 in the nation in graduating African-Americans in Education and the top 50 nationally in graduating African-Americans in mathematics and statistics (out of more than 3,000 institutions nationally). During his tenure, Harris-Stowe has been cited in national college rankings including, US News and World Report, Best Regional Midwest Colleges, the Washington Monthly College Guide Rankings, the Economist College Rankings, Niche College Rankings, and Diverse Issues Annual Degree Producer Rankings. Dr. Smith has been instrumental in developing more than 20 collaborations and partnerships with Harris-Stowe and other institutions and organizations regionally and nationally valued at more than $2 million.

Prior to Harris-Stowe, Dr. Smith served as Assistant Vice President for Academic Affairs at Avila University where he provided leadership over Student Retention, the Weekend and Evening College for adult learners, the Institutional Research Board, and Study Abroad. Dr. Smith has also served as Associate Vice President of Enrollment Management at Park University, was on the graduate faculty at the University of Missouri, Columbia, and as an Associate Dean in the area of multicultural affairs at Truman State University where he created Truman State’s first Diversity Department.

Dr. Smith is a Fulbright Scholar, serves on the Board of the Higher Education Consortium, and Chairman of the Board of NewPot Solutions Charitable Foundation. He also serves on the Council of Chief Academic Officers, and the American Academic Leadership Institute Strategic Planning Council. His other honors include Who’s Who in the Midwest, Who’s Who in America and a member of the national honor societies, Phi Kappa Phi and Kappa Delta Pi.

Dr. Smith earned his Ph.D. in Educational Leadership and Policy Analysis from the University of Missouri, Columbia, M.A. in Education Administration and BS degree in Psychology from Truman State University. He has also completed post-doctoral at Harvard University and participated in the Executive Leadership Academy for emerging University Presidents sponsored by the American Academic Leadership Institute.