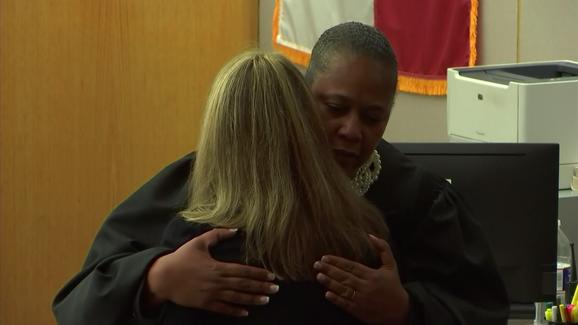 Judge Tammy Kemp, who hugged Amber Guyger and gave her a Bible after the conclusion of Guyger's murder trial, is coming under scrutiny over whether she crossed an ethical line.

The Freedom From Religion Foundation, an organization which says it protects the Constitutional principals of the separation of church and state has filed a complaint against Kemp with the Texas state agency that investigates allegations of judicial misconduct.

The Wisconsin-based group said Kemp went too far after Guyger was sentenced to 10 years in prison. Guyger was convicted of fatally shooting her neighbor, Botham Jean, in his apartment.

We write to raise your awareness of Judge Kemp’s actions at the close of the trial — during which she gifted a Christian bible, instructing the convicted criminal on how to read the bible and which passages to pay attention to, and witnessing to that convicted murderer. These proselytizing actions overstepped judicial authority, were inappropriate and were unconstitutional.

Courtroom video shows that after the sentencing and the victim impact statement, Judge Kemp left the courtroom, then returned holding her personal bible. She walked over to Amber Guyger at the defense table and proceeded to preach.