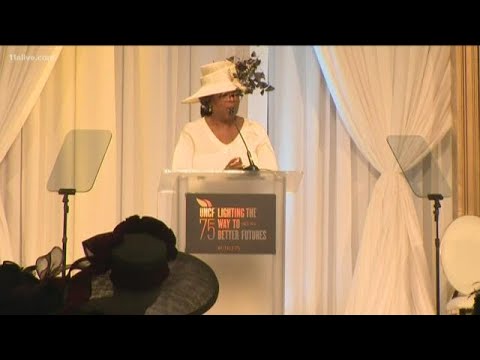 Oprah Winfrey surprised attendees at the United Negro College Fund’s 17th annual Maya Angelou Women Who Lead Luncheon in Charlotte, North Carolina., when she matched a $1.15 million donation, bringing the organization’s total donations at the event to over $2 million.

According to the Charlotte Observer, the United Negro College Fund had hoped to raise $1 million at the event on Saturday to further its support of HBCUs. And it had already done that, with a running tally at the event showing that $1.15 had already been raised, but in the words of Oprah herself, “We do want to make this the world record-breaking event.”

Oprah’s announcement of matching the $1.15 million donation was met with raucous applauds and cheers from the 1,120 people present, most of whom were women, as the Observer notes.

“I believe in the power of education,” Winfrey said during her keynote address. “There is nothing better than to open the door for someone.”

Boom! The awesomeness that is @oprah just matched the $1million dollars that was raised during the #UNCFCharlotte Maya Angelou Women Who Lead Luncheon. Yes, so now over $2million was raised to support #HBCUs this afternoon! Peep this👇🏾#UNCF #blackgirlmagic ❤️🙏🏿 @ Oprah pic.twitter.com/lYeceynhFC