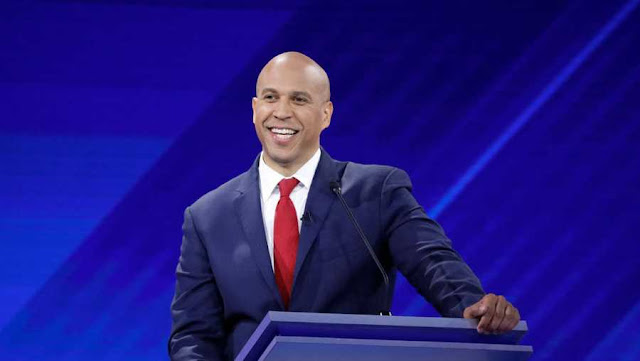 It’s no secret that Cory Booker has been lagging behind the front runners in recent polls as he seems stuck at 2 to 3% support among would be voters.

But at last night’s Democratic Debate at Tyler Perry Studios Booker showed some sparks of life and definitely was one of the nights winners.

Per Dylan Matthews at Vox.com

For about 1 hour and 40 minutes, Cory Booker had a fairly standard, uneventful debate. He got in a good line about being the other Rhodes Scholar mayor on the stage, a light jab at Pete Buttigieg that didn’t land with much force. He had a confusing and forgettable exchange with Elizabeth Warren critiquing her wealth tax plan on technical grounds — a fair hit, but one better reserved for a policy paper than the debate stage.

Then the topic came to the black vote, and Booker broke through.

One of the many challenges facing his campaign so far — and Sen. Kamala Harris’s — has been his failure to break through with black voters nationwide and in South Carolina (where black voters make up a big part of the Democratic primary electorate). Former Vice President Joe Biden’s name recognition and connection to the Obama presidency have apparently been sufficient to swamp any arguments Booker and Harris have tried to make for themselves as superior champions of black voters’ interests.

So Booker decided to fight the fight directly. He first brushed off Buttigieg’s attempts to cater to black voters by noting he’s “been one since I turned 18,” and didn’t “need a focus group” to tell him what black voters think and value — a nice move that subtly undermined the implicit premise behind the question that there’s a monolithic “black vote” to be won en masse.

But then he turned to Joe Biden, and turned an electability question about race into a concrete policy disagreement, noting Joe Biden’s opposition to nationwide marijuana legalization, underlining how devastating marijuana criminalization has been to black men and black communities, and pushing Biden into an embarrassing, fumbling answer in which he claimed the support of the “the only African American woman who’s been elected to the Senate” — to which Booker simply replied, “No, the other one is here,” pointing to Harris.

To break into Biden’s base of black support, Booker needed to draw out clear policy differences with Biden and also to challenge Biden’s claims to respect and revere the black community. He didn’t even need to do the latter himself — he just put an obstacle in front of Biden and just watched as Biden tripped over it.