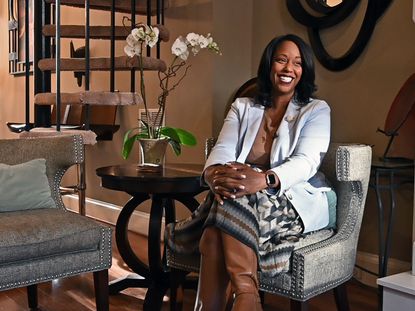 Maryland Democratic Party Chairwoman Maya Rockeymoore Cummings, the widow of U.S. Rep. Elijah Cummings, is running for her husband’s seat, arguing Monday she is the best option to carry out his legacy and continue his vision.

“I am, of course, devastated at the loss of my spouse, but his spirit is with me,” Rockeymoore Cummings, 48, said in an interview with The Baltimore Sun. “I’m going to run this race and I’m going to run it hard, as if he’s still right here by my side.”

Cummings, who had cancer, died Oct. 17 after serving more than two decades in Congress. He left a record of fighting for the needy and battling the administration of Republican President Donald Trump.

Rockeymoore Cummings, a public policy consultant who is founder of the Washington consulting firm Global Policy Solutions LLC and a former 2018 candidate for governor, said her husband told her months before he died he would like for her to succeed him.

“That was a discussion we had some months ago,” she said. “In the end, he was conflicted about whether he should resign or stay in office. We thought there might be a turnaround. It didn’t happen.”

Rockeymoore Cummings plans to kick off her campaign Tuesday at her home office in Baltimore’s Madison Park neighborhood. She said she will focus on issues important to the late congressman, such as battling the opioid crisis and “fighting for the soul of our democracy” against the Trump administration, but also on her areas of expertise, which include health and education policy.

Candidates must file by Nov. 20 to run in a special Feb. 4 primary for Cummings’ 7th District seat, which includes parts of the city of Baltimore and areas of Baltimore and Howard counties. The special election will be April 28, the same day as a regular primary for all of Maryland’s U.S. House seats. Candidates who want to fill Cummings’ seat through the rest of his term, until January 2021, and win the seat for the next two years after that, must run in both the special and regular elections.