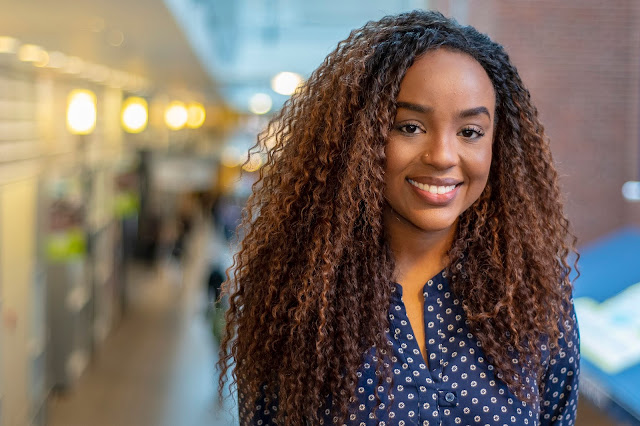 Wanjiku (Wawa) Gatheru, a highly accomplished student leader whose academic achievements have garnered national recognition, has been selected as the University of Connecticut’s first Rhodes Scholar.

Gatheru ’20 (CAHNR), a senior majoring in environmental studies with minors in global studies and urban and community studies, is among 32 people nationwide elected to the American Rhodes Scholar Class of 2020 to continue postgraduate studies at the University of Oxford in England.

The highly prestigious program counts presidents, ambassadors, business leaders, and many other prominent Americans among its alumni, and is among the world’s most selective academic programs. It announced its 2020 class late Saturday, making special note of Gatheru’s achievement as UConn’s first Rhodes Scholar.

“As I reflect on my journey, it is extremely clear to me that my accomplishments – my story – is not my own,” she said Sunday. “I stand on the sturdy shoulders of the many people that have supported me along the way. My family, my mentors, and friends. The Rhodes application is particularly strenuous, with a total of eight letters of recommendation required. So I quite literally would have not been in this position if I didn’t have professors and mentors who believed in me. And I am so thankful for them.”

Gatheru’s academic and service endeavors had been widely recognized even before the Rhodes Scholar announcement. She was a 2019 Truman Scholar and a 2019 Udall Scholar, the first student in UConn’s history to win those illustrious honors in the same year. She has also received several other prominent plaudits during her time as a UConn student, including the McCullough Leadership award, the University’s highest student leadership award.

“Wawa is a rare talent who in her three years at UConn has built a legacy that will endure long after she has graduated,” President Thomas C. Katsouleas said. “She has demonstrated not only a superior intellect, but a depth of character and an unbridled energy that compel her to take action. In addition to being academically gifted, she has played a leading role on critical issues, including environmental sustainability, the inclusiveness of our environment, and food insecurity on our campuses and in our state.

“Please join me in congratulating Wawa and in wishing her all the best during her time studying at Oxford as a Rhodes Scholar,” he said in an announcement about her honor to the UConn community. “We are incredibly happy for her and so proud that she is a Husky!”

On campus, Gatheru also served as vice president of the Undergraduate Student Government (USG) and as the student co-chair of the 2019 University-wide Metanoia, pursuing the theme of “Youth for Change.”

As co-founder of the UConn Access to Food Effort (UCAFE), she helped launch the first assessment of food insecurity on a public institution of higher education in the state. UCAFE’s research has since been cited by U.S. Sen. Chris Murphy, D-Conn., and referenced in the creation of both state and federal legislation.

Gatheru is a 2018 UC Santa Cruz Doris Duke Conservation Scholar and a 2018 Newman Civic Fellow, and is motivated to connect grassroots movements to institutions of power. She was a lead organizer in Connecticut’s first Youth Climate Lobby Day, a United Nations Global Health Fellow, a delegate at the 2017 U.N. Climate Change Discussions, a founding member of the President’s Council on Race and Diversity at UConn, and played a critical role in the successful implementation of UConn’s environmental literacy general education requirement.