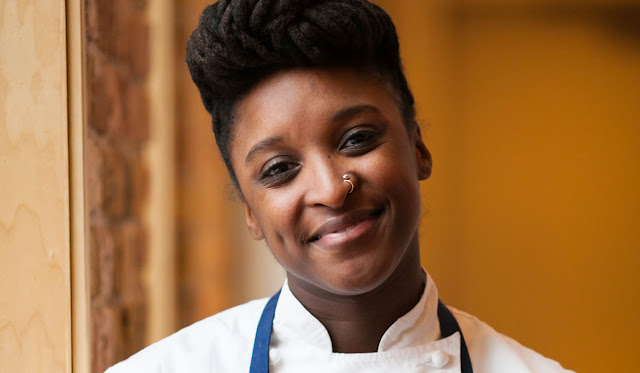 Mariya Russell is a Michelin star chef who is the Chef de Cuisine at the Chicago restaurant Kumiko and Kikko. She was awarded the Michelin star in October, 2019 and became the first black woman to ever receive this honor. Russell was born and raised in Springfield, Ohio.

The Michelin recognition is “mind blowing” and Russell’s thought “a good amount” about its historic nature and how hard her team has worked to get to this point.

As for being the first black woman to receive a Michelin star, she commented about the importance of representation not just in the culinary world but in all industries.

“Thinking about [being] the only Black woman doing this is really, still very much so, blowing my mind. Representation is really important in all kinds of things, but in an industry like this, I think it’s really cool. It’s not an easy industry to work in, so I understand why people don’t do it, but to be recognized for my hard work, but on top of that also being a Black woman is really cool,” she shared. “I’m very grateful for my journey. It hasn’t been very easy — at all — but I’m really grateful for all the people that have crossed my path and taught me something.”

Michelin stars are a rating system used by the red Michelin Guide to grade restaurants on their quality. The guide was originally developed in 1900 to show French drivers where local amenities such as restaurants and mechanics were. The rating system was first introduced in 1926 as a single star, with the second and third stars introduced in 1933.According to the Guide, one star signifies "a very good restaurant", two stars are "excellent cooking that is worth a detour", and three stars mean "exceptional cuisine that is worth a special journey".[2] The listing of starred restaurants is updated once a year.