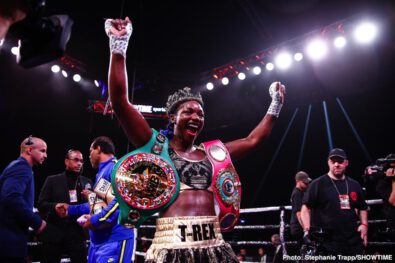 Claressa Shields, who has already unified two women's world titles at super middleweight and then collected all four major belts to become the undisputed middleweight champion, made history in a boxing match at the Ocean Casino Resort.

Shields, moving down in weight yet again, thoroughly dominated Ivana Habazin en route to a near-shutout decision to win a pair of vacant junior middleweight world title belts in the main event of a Showtime tripleheader.

Shields, who still holds the undisputed middleweight title, won a world title in a third weight class in just her 10th bout, setting the record for fewest number of fights needed to win belts in three divisions for a female or male boxer.

"This feels great -- I did it in 10 fights," Shields said. "Now I'm No. 1, the fastest boxer in history to become a three-division world champion. I was [trying to punish her]. I wanted victory."