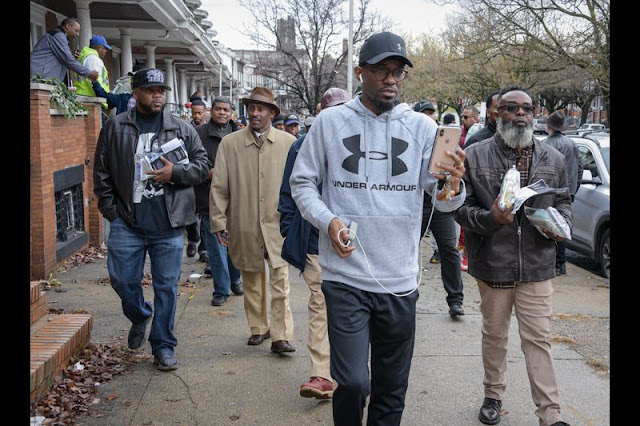 About 60 strong, the group of mostly African American men walked the streets of East Baltimore on Saturday, talking with residents on porches, greeting drivers at stoplights, handing out flyers about jobs, drug treatment and family support. They invited passers-by to join their growing ranks.

“We’re all we’ve got,” they chanted as they left Faith United Baptist Church on The Alameda. “We’re all we need.”

The men — pastors, activists, residents and others — have been walking three times a week for several months now through different parts of the city. It’s not a march, they say, but a movement. Their mission is to save lives in a city beset by violence.

“We have to be at the center of the change of saving lives,” Dr. Andrey Bundley, an organizer and director of African American Male Engagement, a division of the Mayor’s Office of Children and Family Success, told the group setting out from the church. “If the state of black men is going to change, it’s going to take black men to inspire and guide black men, first, and then other people of good will.”