The North Carolina A&T Aggies are the 2017 HBCU Football Champs! 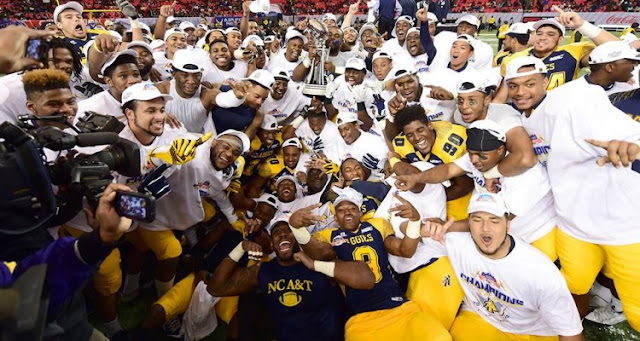 The North Carolina A&T Aggies (12-0) are once again HBCU football champions after defeating the Grambling University Tigers (11-2) by a score of 21-14 at the third annual Celebration Bowl.

The Aggies were lead by QB Lamar Raynard, who completed 23 of 43 passes for 225 yards and a touchdown and had 17 yards on eight carries.

"It's a great feeling to make history," the junior quarterback said.

Running back Marquell Cartwright aided the team's effort by rushing for 110 yards on 20 carries.

Franklin McCain III made the defensive play of the day for the Aggies. The freshman cornerback ended a Grambling drive following the second-half kickoff with an interception at the goal line.

"It's awesome," said McCain. "Not many programs can say that they went 12-0 and won a national championship. It's unbelievable."

"It's an awesome feeling to be 12-0 right now," N.C. A&T coach Rod Broadway said. "I'm just extremely proud of our players, and I'm happy for our school."