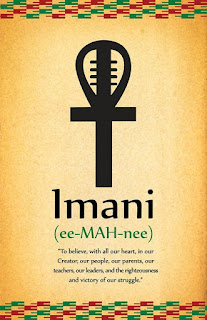 On this, the seventh day of Kwanzaa the days principle is IMANI.

Imani (Faith): To believe with all our hearts in our people, our parents, our teachers, our leaders, and the righteousness and victory of our struggle.