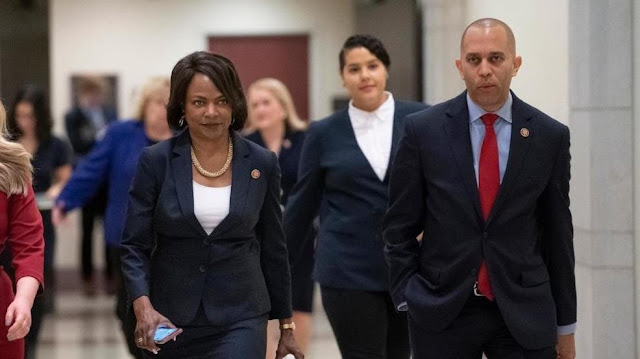 Demings is a retired law enforcement officer with 27 years on the force who served as Chief of the Orlando Police Department.

She sits on the following House committees:

Subcommittee on Border and Maritime Security

Committee on the Judiciary

Subcommittee on Intelligence Modernization and Readines

Rep. Hakeem Jeffries served as a clerk for Judge Harold Baer, Jr. of the United States District Court for the Southern District of New York. He then worked in the litigation department of Paul, Weiss, Rifkind, Wharton & Garrison before becoming an assistant litigator for Viacom and CBS. During Jeffries' time at Paul, Weiss he also served as director of intergovernmental affairs for the New York State Chapter of the National Association of Minority Contractors and as the president of Black Attorneys for Progress.

He is currently the Democratic Caucus Chair which is the fourth position in House leadership and heads organization of all Democratic Party members in the House.

Jeffries sits on the following Committees:

Besides Demings and Jeffries the managers are: