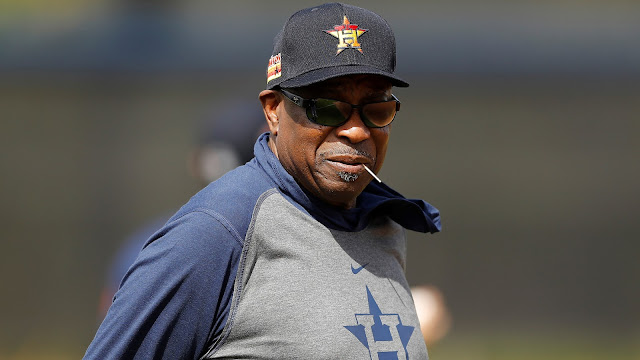 Houston manager Dusty Baker celebrated Jackie Robinson’s legacy on the 73rd anniversary of the fall of the major league color barrier and lamented the lack of African Americans in today’s game.

“It’s frustrating because we’ve talked about it forever … but it seems like the numbers are dwindling instead of increasing,” Baker said Wednesday.

Only 7.7% of big league players on opening day rosters last year were African American, down from 17% in 1990. Baker and Dodgers manager Dave Roberts are the only two African American managers in the majors.

Baker appreciates that the league is making a “conscious effort” to get more young African Americans involved in baseball through programs like Reviving Baseball in Inner Cities and is optimistic there can be a turnaround in the upcoming years.

“Hopefully in this decade and the next decade there will be more guys that get a chance,” Baker said. “All they need is a chance. A lot of guys have been bypassed and overlooked.”

Robinson broke the color barrier on April 15, 1947, for the Brooklyn Dodgers. His No. 42 was retired throughout the major leagues in 1997 by then-Commissioner Bud Selig. An annual Jackie Robinson Day started in 2004 and since 2009, all players, managers, coaches have worn his No. 42 to mark the day.

Baker didn’t have the opportunity to meet Robinson but heard plenty of stories about him from Hank Aaron and other players and managers. He idolized Robinson growing up because of stories his father told him from the time he was a young child.

“He was a man that made it possible for me to not only play but manage and gave us all a great sense of pride about being a black American,” Baker said.