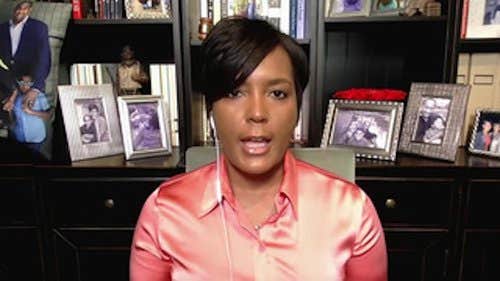 Atlanta Mayor Keisha Lance Bottoms on Sunday called the shooting death of an unarmed African American jogger a "lynching" and said arrests of two accused men would not have been made if there was not video of the incident.

"It's heartbreaking that it's 2020 and this was a lynching of an African American man," Bottoms said of Ahmaud Arbery's death on CNN's Jake Tapper on "State of the Union."

Arbery, 25, was shot and killed on February 23 while jogging in southern Georgia. Gregory McMichael, 64, and his son, Travis McMichael, 34, were arrested Thursday -- three months following the fatal shooting -- after a 36-second video that appears to show the incident went viral.

Bottoms said she believes the arrests would not have been made had video of the shooting not surfaced. CNN has not verified who recorded the video -- taken by someone in a vehicle that pulls up behind a pickup truck stopped in the road -- but it captured events that match numerous accounts of the shooting.

"I think that's absolutely the reason that they were charged. I think had we not seen that video, I don't believe that they would be charged," Bottoms said. The Democrat also said Arbery's death is a bigger issue that extends beyond the state of Georgia.

"With the rhetoric we hear coming out of the White House in so many ways, I think that many who are prone to being racist are given permission to do it in an overt way that we otherwise would not see in 2020," she said. "In cities across this country, even if local leadership fails, there was always the backstop of our Justice Department to step in and make sure people are appropriately prosecuted. But we don't have that leadership at the top right now. It's disheartening."

She continued, "I think it speaks to the need to have leadership at the top that cares for all of our communities and not just in words but in deeds as well."