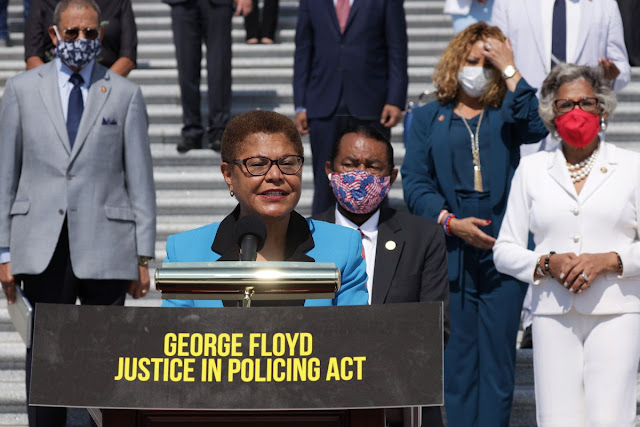 The NAACP applauded the bi-partisan passage by the U.S. House of Representatives of H.R. 7120, the “George Floyd Justice in Policing Act.” The legislation represents unprecedented action and a significant first step to prevent and address violence against the Black community by law enforcement all over the country.

While there is more to be done, the legislation seeks to hold law enforcement officials accountable for their actions. It bans chokeholds and “no-knock warrants,” requires body-worn cameras, removes iron-clad protections for police officers such as “qualified immunity,” provides stronger investigative authority for federal and state officials, ends racial and religious profiling, limits military equipment on American streets, and classifies lynching as a hate crime.

Derrick Johnson, President & CEO, of the NAACP, stated: “This legislation represents the only way forward. If we’ve learned anything from these past weeks, it’s that the American people are demanding systemic change. We need bold, transformative action to rethink policing and reimagine public safety in our communities.

For far too long, police across the country have operated with impunity and no regard for the people they are sworn to protect and serve. We have witnessed the tragic consequences in the brutal killings of George Floyd to Breonna Taylor to Elijah McClain, and countless others who have lost their lives to state-sponsored violence.

We now call upon the Senate to put partisanship aside and do the right thing by passing this seminal legislation. The Black community and, indeed, our entire nation cannot afford to risk one more life and wait for one more day. Congress must seize this extraordinary moment in time to push for the elimination of racism in policing and in the criminal justice system writ large, and to rid our society of the structural inequality that has tormented and held back our nation for far too long.