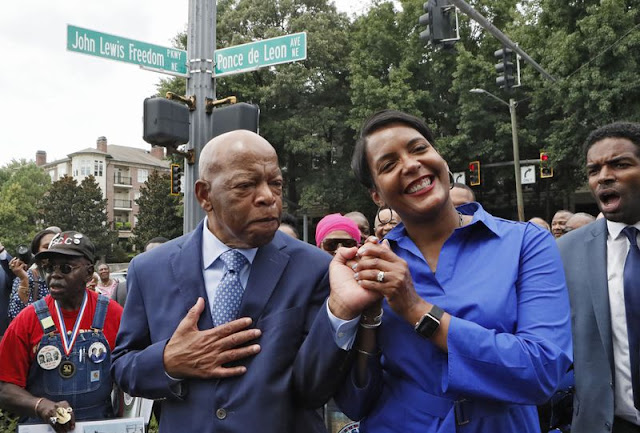 Mayor Keisha Lance Bottoms Honors the Life and Legacy of Congressman John R. Lewis
Mayor Bottoms Orders Lowering of City Hall Flags to Half-Staff
ATLANTA—Mayor Keisha Lance Bottoms issued the following statement upon the passing of Atlanta’s revered Congressman John Lewis.
“There are no words to describe the tremendous loss that Americans, Atlantans, and I personally feel upon learning of the passing of Congressman John Lewis,” said Mayor Bottoms. “America knew him as a Civil Rights Icon, Congressional Giant, and a moral compass, but I knew him as a friend. The people of Atlanta often called upon Congressman Lewis for counsel, guidance, and assistance with getting into good trouble. No matter how busy his schedule, or important his Washington duties were, he answered. We were privileged to be represented by a leader with both a pure heart and an unshakable commitment to human rights. As we persevere in the modern fight for social justice, we should honor his legacy by continuing to hold on to hope. I pray for his family, his constituents, and all who loved and were impacted by the life of Congressman John Lewis.”
Mayor Keisha Lance Bottoms ordered flags to be lowered to half-staff immediately on all City of Atlanta facilities until further notice in honor of the late Congressman.
The City of Atlanta’s Congressman Lewis is an American hero and one of the pillars of the Civil Rights Movement. Congressman Lewis was also revered as the dean of the Georgia Congressional delegation whose passionate call to "make good trouble" became a generational rallying cry for nonviolent activism in the pursuit of social justice and human rights.
From his early days as a student activist, an original Freedom Rider, and a founder and leader of the Student Nonviolent Coordinating Committee, John Lewis became a symbol of perseverance and strength even as he endured physical violence and imprisonment. The sit-ins that he organized at segregated lunch counters and peaceful protests that he led, marching across the South, including "Bloody Sunday" in Selma, Alabama, became a beckon of hope in the pursuit of equal rights.
As one of the Civil Rights Movement's "Original Six," this son of an Alabama sharecropper, at age 23, was the youngest speaker at the March on Washington on August 28, 1963. During that speech, he implored government leaders to wake up to the evils of segregation, closing with words that still resonate today: "We must say, 'Wake up, America! Wake Up! For we cannot stop and we will not and cannot be patient.”
John Lewis began his political career as a member of the Atlanta City Council and was re-elected 16 times to the U.S. House of Representatives from Georgia's 5th Congressional District, where he became known as the conscience of the U.S. Congress. The City hopes his courage, sacrifice, and leadership continue to inspire the best in us and all that America has to offer.

Posted by Councilman George L. Cook III at 11:56 AM