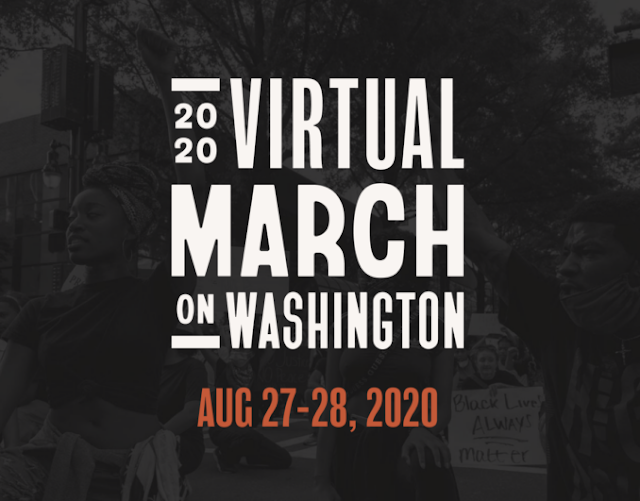 Virtual programming on 57th anniversary of March on Washington will advance a bold Black agenda; honor the legacy of John Lewis

BALTIMORE — The NAACP announced that it will lead a “2020 Virtual March on Washington” alongside civil rights leaders, activists, and families of those who died at the hands of law enforcement, to call for police accountability reform and mobilize voters ahead of the November elections.
The virtual march — which will bring forward a bold National Black agenda  — will take place on August 28th, 2020, the 57th anniversary of the historic March on Washington, where the Rev. Dr. Martin Luther King Jr. delivered his “I Have a Dream” speech. Accompanying virtual events with music performances and keynote speakers will also take place on the nights of August 27th and 28th.
“To meet both the urgency and unique circumstances of this political moment, we are driving this movement from protest to policy to power with all the innovative tools at our disposal, including and especially through virtual organizing,” said Derrick Johnson, President and CEO of NAACP. “Our 2020 Virtual March on Washington is about asking everyone — from protesters in the streets to elected officials at all levels of government — to commit to pursuing a new agenda that prioritizes equity, justice, and equal opportunity for all. As we approach the November elections, we must mobilize to vote like we’ve never done before.”
This inclusive day of action seeks to channel the soaring energy from this national moment of reckoning and will call for reforms of the systems, structures, policies, and attitudes that enable police brutality, racial discrimination, and interpersonal racism. The NAACP will also execute a robust civic engagement effort with multiple levers of change, including registering participants to vote and encouraging them to participate in the Census.
“With the heartbreaking passing of civil rights titan John Lewis, good-willed people all across this country can participate in this march to honor his life and legacy and commit to pursuing a bold Black agenda that advances the unfulfilled promise of our democracy,” President Johnson continued. “We must consider the lives we are attempting to forge for our families and communities. We must act in our best interest to knock down the walls of injustice and grant future generations access to higher social, economic, and political power. This is what the 2020 Virtual March on Washington is all about.”
A series of virtual and in-person programming will take place on the following dates:
Coming days after both the Democratic National Convention and the Republican National Convention, the 2020 Virtual March on Washington will set forth a bold new Black agenda — advocating for comprehensive police accountability reform, economic empowerment, and equitable access to health care, education, and the voting booths. For more information, visit 2020march.com.