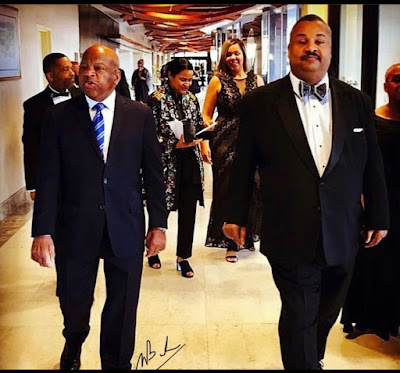 Congressman Donald M. Payne, Jr. released the following statement regarding the passing of Congressman John Lewis. The Georgia Representative and civil rights icon died on July 17, 2020, after fighting cancer for several months. Congressman Lewis spent more than 30 years in Congress, marched with Dr. Martin Luther King, Jr., and fought for racial equality across the country during his storied and historic life.

“This is just a devastating loss for me and our entire country,” said Congressman Donald M. Payne, Jr. “Congressman Lewis was such a great fighter for the right thing in our nation. For me, I have lost one of my fathers on the floor of the House. I was in awe of how he could convey such power and strength with a gentle demeanor. His passion and love for his country and people brought out a ferociousness in this mild-mannered man. He didn’t just speak for civil rights, he stood up against abuse and suffered to make this a better country for all Americans.

I learned so much from him. One of my greatest honors happened when we held a ‘sit-in’ on the floor of the House to try and get a vote on gun control legislation. It was his leadership that sparked that effort. There were so many situations like that I could mention. He always said it was important to ‘get into good trouble’ and those words have inspired me to this day. He was a hero, a mentor, a leader, and a great, great friend. As I said before, this is a tragic loss for our entire country.”