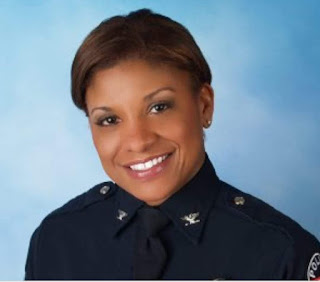 Louisville Mayor Greg Fischer announced today that interim LMPD Chief Rob Schroeder is retiring from the department, and former LMPD Deputy Chief Yvette Gentry has agreed to serve in the interim role until a new permanent Chief is installed.
Gentry retired from LMPD in 2014 after serving more than 20 years in investigations, strategic planning, budgeting and patrol; she became deputy chief in 2011. A year later, Mayor Fischer named her as the city’s Chief of Community Building, a role she held until 2017. Gentry is taking a leave of absence from her current roles in philanthropy at the Rajon Rondo Foundation and Metro United Way to serve until a permanent LMPD Chief is in place.
Gentry, who will be the first female to ever lead the LMPD in its 200-plus year history, did not apply for the permanent chief position and said she has no interest in serving longer than it takes to give a new chief a successful transition period.
“I am taking a pause from positions that have provided me time to heal and enjoy my family,” Gentry said. “I am returning to the high-stress law-enforcement field in large part to help lead a call to action for those willing to do the work it takes to heal our city – and provide truth so we can have reconciliation, and create a system of justice rooted in equity.”
The Mayor noted that Chief Schroeder had agreed to take the interim role for four months, and is moving on to prioritize his family and his health, and complete his doctorate.
“Many, many thanks to Chief Schroeder for stepping in during a tumultuous time for our city,” Mayor Fischer said. “Rob came into this role as a reformer and innovator, having led the implementation of police body cameras and the creation of the Real Time Crime Center, and continued that path of reform as interim Chief – helping implement Breonna’s Law, new rules on duty to intervene, restrictions on use of force and tear gas, and moving to more quickly clear a backlog of internal investigations.
“I greatly appreciate Rob’s commitment to our city,” the Mayor added, “and I know some city will be very lucky to have him as police chief when he is ready to pursue that role on a permanent basis.”
Chief Schroeder said: “I am grateful to have had this opportunity to serve the city and the police department that I love. I am deeply proud of the men and women of LMPD, and how committed they are to keeping our city and our residents safe.”
The Mayor said he’s also deeply appreciative of Gentry’s willingness to take on this interim role.
“Yvette brings the unparalleled experience and strong community relationships needed to lead LMPD until a permanent Chief is in place,” the Mayor said, “and she is passionate about working to help her city address systemic racism and reimagine public safety. She has never been shy about offering her advice, and I look forward to having her on the team as we move forward in selecting a permanent Chief.”
Gentry will report on Sept. 14th and will work with Chief Schroeder to ensure a smooth transition before his retirement begins on Oct. 1 and she becomes interim Chief.
The Mayor noted today that more than 20 people applied by the Aug. 31 application deadline for the permanent Chief role, and “we continue to follow the process that we laid out earlier this summer for selecting a new chief, which began with community engagement.”
The search is being conducted by the Police Executive Research Forum (PERF), a non-profit Washington, D.C.-based police research organization acclaimed for guiding cities across the country on issues such as reducing police use of force; developing community policing and problem-oriented policing; using technology to deliver police services to the community; and evaluating crime reduction strategies. For 30 years, PERF has identified the most skilled professionals in the field and assisted cities in recruiting and selecting well-qualified candidates.
Before posting the job description and soliciting applications, the city and PERF received input from more than 10,000 people who responded to an online survey about qualities a new chief should have, as well as input that came through nearly two dozen listening sessions with focus groups throughout the community. These meetings, held both in person and virtually, included a variety of constituencies: Metro Council and other elected officials, the business community, faith leaders, the international community, activist groups, LMPD, and others.
Next steps in the hiring process include working with PERF to review, vet and sort the applicants, based on how their qualifications line up with those that the community helped create. A small group will then convene to review the list, narrow it, conduct interviews, and identify top candidates who appear best suited to lead the LMPD. That process will also involve the community and LMPD by incorporating the input previously collected, as well as an opportunity to ask questions of the candidates. Anyone interested in suggesting interview questions can email them to:LouisvilleChiefQuestions@policeforum.org.
Mayor Fischer is expected to name the new permanent Chief by the end of the year.