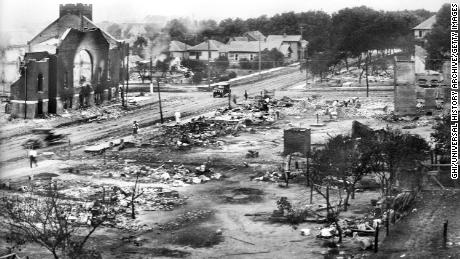 Lebron James's SpringHill Company is collaborating with CNN Films to create a documentary that examines the history of the 1921 Tulsa race massacre, according to news release.

Dubbed "DREAMLAND: The Rise and Fall of Black Wall Street," the film will look at the history of Tulsa, Oklahoma's Greenwood district -- better known as "Black Wall Street" -- and the devastating history of the race massacre that followed.

"We cannot move forward until we acknowledge our past and this is about honoring a prosperous, booming Black community, one of many, that was brought to an end because of hate," Jamal Henderson, SpringHill's chief content officer and one of the executive producers of the documentary, said in the news release.

"With the lack of historic journalism around 'Black Wall Street' and the Tulsa Massacre of 1921, we are honored to be partnered with CNN, which has a long-standing record of credible and groundbreaking journalism," he continued.

James will serve as one of the executive producers of the film, along with Salima Koroma who will be the director.

"CNN Films could not be more proud to partner with The SpringHill Company for this long-overdue recognition of the tragedy of what happened in Greenwood, and to contribute to the reconciliation that comes with the acknowledgment of history," said Amy Entelis, executive vice president for talent and content development for CNN Worldwide in a news release. "Salima Koroma's vision will yield a truly thoughtful film."