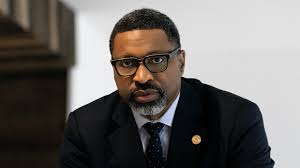 The NAACP President and CEO, Derrick Johnson released the following statement after it was revealed the plot to kidnap Michigan Governor Gretchen Whitmer was organized on Facebook:

From recruiting white supremacists to coordinating acts of terrorism, Facebook continues to be a platform that encourages hate and threatens our very lives.

Mark Zuckerberg is doing nothing but dancing his way around the reality that his $730 Billion platform is responsible for countless lives.