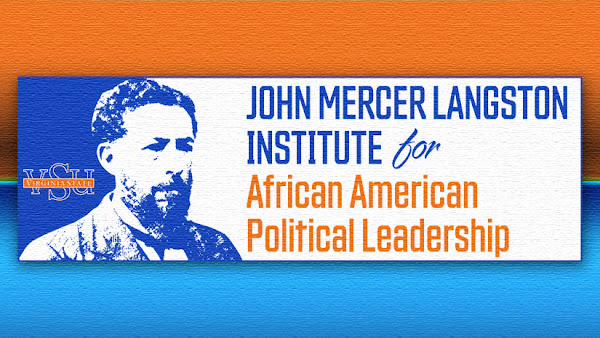 The JMLI at Virginia State University is devoted to developing, empowering, and cultivating African American leadership in the Commonwealth of Virginia through innovative training, policy collection and assistance, programming, research, and networking.

Along with today’s announcement, the John Mercer Langston Institute kicked off the inaugural “Black Virginia Voters Poll”, which highlights the needs of Black Virginia voters from across the Commonwealth. The poll will be available on the VSU website.

According to Dr. Wes Bellamy, Chair of the VSU Department of Political Science, “This Institute will help develop a pipeline for Black political leadership across the state and ensure that the voices of those who are often unheard will be represented. We hear loud and clear the need for change, for new voices, a thirst for understanding political structures, and people eager to make a difference. The JMLI institute is here to do just that.”

VSU President, Dr. Makola M. Abdullah says “As we look at the current political climate, it is imperative that clear avenues for Black political development are available. VSU has consistently worked to ensure that our students are prepared and equipped to be viable assets to society in the Commonwealth and beyond. The JMLI will serve as an additional voice and pathway to make that happen.”

The JMLI will also host a formal institute to develop Black political leadership in February 2021. Registration for the institute will be available in December 2020.

John Mercer Langston was an American abolitionist, attorney, educator, activist, diplomat, and politician. He was the first president of Virginia State University and the first dean of the law school at Howard University.