The Dead Are Arising: The Life of Malcolm X Wins 2020 National book Award 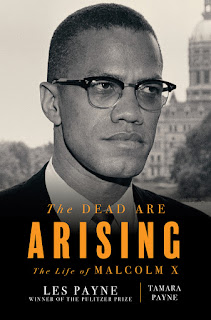 Tamara Payne and her late father Les Payne’s Malcolm X biography, “The Dead Are Arising,” has won the National Book Award for nonfiction.

Les Payne, the renowned Pulitzer Prize–winning investigative journalist, embarked in 1990 on a nearly 30-year-long quest to interview anyone he could find who had actually known Malcolm X. His goal was ambitious: to transform what would become dozens of interviews into an unprecedented portrait of Malcolm X, one that would separate fact from fiction. Introduced by Payne’s daughter and primary researcher, Tamara Payne, The Dead Are Arising is a riveting work that affirms the centrality of Malcolm X to the African American freedom struggle.

The award for “The Dead Are Arising” is the second time in a decade a Malcolm X biography has received a high honor for nonfiction and the second time the honor was, at least in part, posthumous.

Scholar Manning Marable died right before the 2011 publication of “Malcolm X,” which went on to win a Pulitzer Prize and receive a National Book Award nomination. Les Payne died in 2018 before he could finish the book. His daughter, Tamara Payne a researcher, finished the book.

“This is such a bittersweet moment,” Tamara Payne said upon accepting the award at the Nov. 18 ceremony that was streamed online because of the pandemic, with presenters and winners speaking everywhere from New York to Japan. “I really wish my father was here for this.”

Winners in each of the competitive categories receive $10,000.

CHECK OUT THE BOOK
Posted by Councilman George L. Cook III at 7:32 PM