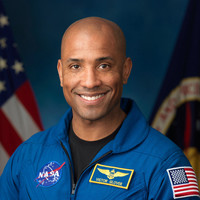 Early Tuesday morning (Nov. 17), the 44-year-old NASA astronaut came aboard the International Space Station, becoming the first African American ever to begin a full six-month stint on the orbiting lab.

Crew-1 is even more historic thanks to Glover's milestone, which is long overdue considering that rotating astronaut crews have been living aboard the orbiting lab continuously for 20 years now. In typical astronaut fashion, Glover has been self-effacing about his place in history, deflecting the spotlight onto his crewmates and the other people who have worked hard to make Crew-1 a success.

"It is something to be celebrated once we accomplish it, and, you know, I am honored to be in this position and to be a part of this great and experienced crew," Glover said during a news conference last week, before Crew-1 got off the ground. "And I look forward to getting up there and doing my best to make sure that, you know, we are worthy of all the work that's been put into setting us up for this mission."

Glover isn't the first African American astronaut to spend time on the station. A handful of others visited the orbiting lab during space shuttle missions, but those were brief jaunts lasting just a few weeks. Glover will spend more than six months in orbit, serving as a crewmember on the space station's Expedition 64 and Expedition 65 missions.

As The New York Times noted, more than 300 NASA astronauts have reached space to date, but Glover is just the 15th African American member of this exclusive club. (Crew-1 is the first spaceflight for Glover, a U.S. Navy commander and pilot who was selected as an astronaut in 2013.)