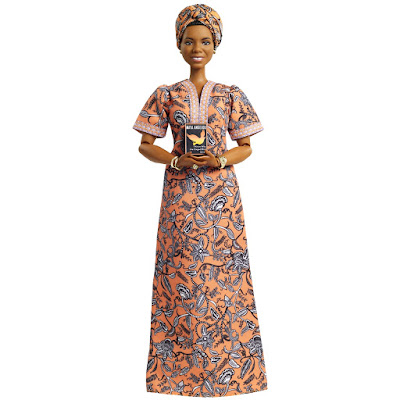 This month, Barbie® is continuing its commitment to inspire girls to dream big by welcoming writer, author, activist, and teacher Dr. Maya Angelou to the Barbie® Inspiring Women™ series, which pays tribute to incredible heroines of their time.

“We are so proud to include Dr. Maya Angelou in the Barbie Inspiring Women line. As a powerful writer and activist, her extraordinary life and unforgettable legacy is exactly what we hope this collection inspires in the next generation,” said Lisa McKnight, Senior Vice President and Global Head of Barbie and Dolls, Mattel. "By introducing children to Dr. Maya Angelou’s courageous story and written works through doll play, our goal is to spark conversation and awareness with children and their families.”<:p>

Dr. Maya Angelou received numerous awards and accolades including over 50 honorary doctorates. Her 1970 autobiography I Know Why the Caged Bird Sings was nominated for the National Book Award and continues to move readers today. In 1993, she became the first African American and female poet to speak at a U.S. Presidential inauguration.

Sculpted to her likeness, Dr. Angelou’s BarbieInspiring Women Doll holds a miniature replica of her prolific autobiography, while wearing a head wrap and floor-length dress with floral print.

Barbie’s Inspiring Women series, which began in 2018, has celebrated nine courageous women who took risks, changed rules and paved the way for generations of girls to dream bigger than ever before. Last year, the series paid tribute to Billie Jean King, Ella Fitzgerald, Florence Nightingale, and Susan B. Anthony who made history by making the world a better place for future generations of girls. Amelia Earhart, Katherine Johnson, Frida Kahlo, Rosa Parks and Sally Ride have also been honored as part of the series.