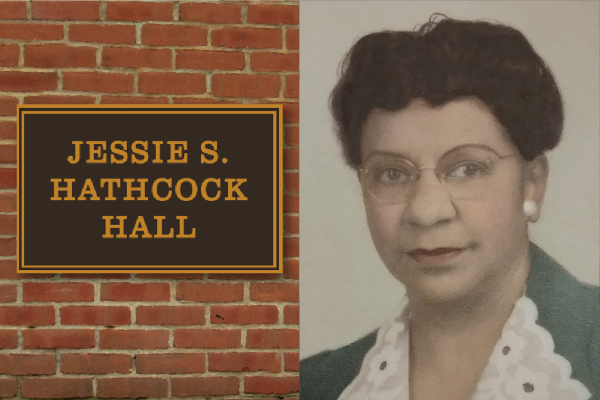 The University of Dayton on Jan. 22 announced that its newly renovated computer science academic building will be named in honor of Jessie Hathcock ‘30, the first African American woman to graduate from the University, a noted educator and humanitarian in the Dayton community.

"Jessie Hathcock's life includes an extraordinary record as an educator and community leader, achieving success through courage and perseverance," said President Eric F. Spina. "She was a true pioneer and dedicated to serving others with empathy and compassion.

"Jessie S. Hathcock Hall will be an exciting educational facility, housing our fastest growing academic program, equipped to offer students the classroom and experiential learning opportunities they need for success in this dynamic field," Spina said. "It is a fitting tribute to a quintessential educator and truly distinguished UD alumna.

"Naming the building for this trailblazing woman will make her life and her story visible to generations of UD students, inspiring them to continue her legacy of educational excellence, humanitarianism and community activism," Spina said.

Hathcock graduated from UD with a bachelor's degree in education in 1930. She taught in Dayton public schools for 34 years, and was Dean of Girls and an English teacher at Dunbar High School. At Dunbar, she touched the lives of thousands of students, organizing the Dunbar PTA, and serving for many years as faculty sponsor of the student council, Junior Council on World Affairs, and the Junior Red Cross.

In addition to serving the Dayton community through education, she worked with the City Beautiful Council, the Wegerzyn Garden Board and the American Association of University Women. A global citizen, she traveled the world extensively, was active in the Dayton Council on World Affairs, and founded the Dayton and Miami Valley Committee for UNICEF.

She also was a charter member of Beta Eta Omega, Dayton, Ohio, chapter of Alpha Kappa Alpha Sorority Inc. and served as its first president in 1934. Selected as one of the Ten Top Women in Dayton in 1966 for her humanitarian efforts and civic pride, she was a longtime member of St. Margaret's Episcopal Church in Dayton.

In 1978, she received an honorary doctorate in humanities from the University of Dayton, the first African American woman to be so honored. In her words of thanks to the university, she stated, “May the University of Dayton continue to grow in influence for the betterment of our city and may its doors of learning be forever open to all races, creeds and nationalities, for the Glory of God, who taught us the meaning of brotherhood and the oneness of mankind.”Hathcock's family — granddaughter Beverly Hathcock Robinson and her husband, Leonard, grandson Lloyd Hathcock and his wife, Barbara — said the entire family, including many cousins, are pleased and honored.

"We are simply delighted and thrilled. As an educator for many years, our grandmother would be particularly pleased that the building named in her honor is a place of learning," the family said.

The Jessie V. Scott Hathcock Memorial Scholarship was established in her honor in 2004 to assist either traditional or non-traditional students, with first preference given to female, African American students majoring in education or English, with a preference for residents from the City of Dayton. Candidates must represent the qualities of leadership and service illustrated by Hathcock's life. Click here for information on the scholarship or to make a gift.

The University also announced the department chair office suite will be named to honor Father Thomas Schoen, S.M., who helped found the University's computer science program in 1961, one of the first such programs in the nation.

As a Marianist brother, Schoen led the development of the computer science department as chair from 1961 to 1978, Although he had a successful ministry as a teaching brother at UD, he always felt called to the priesthood. After his ordination in 1987, he returned to UD to teach computer science until 2006. In 2009, Fr. Thomas was named professor emeritus for his instrumental role in bringing UD into the computer age, after serving the University for more than 50 years.

Hathcock Hall, the former Music/Theatre Building, will be the new home for the growing Department of Computer Science. The 58,000-square-foot project includes new classroom, laboratory and office spaces, as well as an enclosed walkway to connect the facility to Kettering Labs. View a video about the building and how it will support computer science learning.

A formal dedication and blessing will be held in the fall, should pandemic conditions permit.